Kenyan security forces have killed all five attackers who stormed an upscale Nairobi hotel complex, taking at least 21 lives and causing hundreds to flee, according to authorities.

At least 50 people believed to have been in the compound remained unaccounted for on Wednesday, the Kenya Red Cross said, raising the possibility of a higher final death toll.

The al-Shabab armed group, an al-Qaeda affiliate, said it carried out the attack in the Kenyan capital in response to US President Donald Trump’s decision to recognise Jerusalem as the capital of Israel. Two people accused of facilitating the attack have been arrested.

Of the victims, 16 were Kenyan, one was British, one was from the United States and three were of African descent but their nationalities were not yet identified, police said.

Uhuru Kenyatta, the president of Kenya, announced the end of the 20-hour siege at the DusitD2 complex that echoed a 2013 assault that killed 67 people at the Westgate mall in the same district.

“The security operation at Dusit complex is over and all the terrorists have been eliminated,” Kenyatta said in a televised address on Wednesday.

Authorities sent special forces into the hotel to flush out the gunmen. The president said more than 700 civilians were evacuated from the complex.

“My sister is not in any of the hospitals and the last time we spoke she was a bit calm. But suddenly she started crying and shouting and I could hear gunshots and her phone remained on but she wasn’t speaking,” said a woman who gave her name as Njoki.

According to Kenya’s police chief, Joseph Boinnet, the coordinated assault began at 3pm local time (12:00 GMT) on Tuesday with an explosion that targeted three vehicles outside a bank, and a suicide bombing in the hotel lobby that severely wounded a number of guests.

On April 2, 2015, another al-Shabab attack killed 148 people at the university in Garissa, in eastern Kenya.

Like the attack at the Westgate Mall, this one appeared aimed at wealthy Kenyans and foreigners.

It came a day after a magistrate ruled three men must stand trial in connection with the Westgate Mall siege. 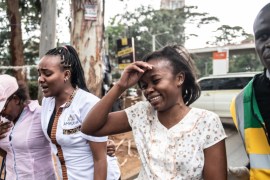 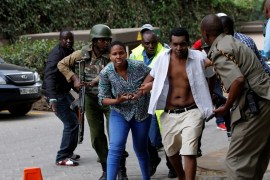