White House officials and congressional staffers will continue negotiations on Saturday over the government shutdown, even after President Donald Trump declared he could keep it going for “months or even years“.

Trump met on Friday with congressional leaders from both parties as the shutdown hit the two-week mark amid an impasse over his demand for billions of dollars for a border wall with Mexico. Democrats emerged from the meeting, which both sides said was contentious at times, to report little if any progress.

Trump has designated Vice President Mike Pence, Homeland Security Secretary Kirstjen Nielsen, and adviser Jared Kushner to work with a congressional delegation at a meeting set for 11am (16:00 GMT) Saturday.

Trump is framing the upcoming weekend talks as progress, while Democrats are emphasizing families unable to pay bills.

“I hope it doesn’t go on even before a few more days,” Trump said on Friday, referring to the shutdown. “It really could open very quickly. We had a very, very productive meeting, and we’ve come a long way.”

‘Don’t call it a shutdown’

Key parts of the US government shut down on December 22 after Trump refused to back down on his request for more than five billion dollars in funding for a wall along the US-Mexico border, which the Democrats oppose.

The standoff has prompted economic jitters and anxiety among some in Trump’s own party.

“We won’t be opening until it’s solved,” Trump said. “I don’t call it a shutdown. I call it doing what you have to do for the benefit and the safety of our country.”

The US president reportedly said he preferred to call the action a “strike”.

Trump said he could declare a national emergency to build the wall without congressional approval, but would first try a “negotiated process”. Trump previously described the situation at the border as a “national emergency” before he dispatched active-duty troops in what critics described as a pre-election stunt.

Trump also said the hundreds of thousands of federal workers who are furloughed or working without pay would want him to “keep going” and fight for border security. Asked how people would manage without a financial safety net, he declared, “The safety net is going to be having a strong border because we’re going to be safe.”

Security officers at US airports have reportedly been calling in sick in droves since the shutdown began and their paycheques stopped rolling in.

Lara Brown, a professor at George Washington University, told Al Jazeera the situation underscores the failure of Trump’s campaign pledge to have Mexico pay for the border wall.

“Most Democrats are saying, ‘Look we do have $1.3bn in border security funds in the package the House passed last night’ … and the president is still not accepting it,” said Brown.

Democrats called on Trump to reopen the government while negotiations continue. Senate Democratic Minority Leader Chuck Schumer said, “It’s very hard to see how progress will be made unless they open up the government.”

House Democrats muscled through legislation Thursday night to fund the government but not Trump’s proposed wall. However, Senate Majority Leader Mitch McConnell has said those measures are non-starters on his side of the Capitol without the president’s support.

A variety of strategies are being floated inside and outside the White House, among them trading wall funding for a deal on immigrants brought to the country as young people and now here illegally, or using a national emergency declaration to build the wall.

While Trump made clear during his press conference that talks on the Deferred Action for Childhood Arrivals (DACA) programme would have to wait and he was trying to negotiate with Congress on the wall, the conversations underscored rising Republican anxiety about just how to exit the impasse.

But with staff level talks, there is always an open question of whether Trump’s aides are fully empowered to negotiate for the president. Earlier this week, he rejected his own administration’s offer to accept $2.5bn for the wall. That proposal was made when Pence and other top officials met Schumer at the start of the shutdown.

Trump was joined by Pence in the Rose Garden, as well as House Republican leaders Kevin McCarthy and Steve Scalise. McConnell, who went back to the Capitol unaware of the press conference, said it was encouraging that White House officials and the congressional contingent would meet over the weekend “to see if they can reach an agreement and then punt it back to us for final sign off”.

Schumer said if McConnell and Senate Republicans stay on the sidelines, “Trump can keep the government shut down for a long time.”

“The president needs an intervention,” Schumer said. “And Senate Republicans are just the right ones to intervene.”

Adding to national unease about the shutdown are economic jitters as analysts warn of the risks of closures that are disrupting government operations across multiple departments and agencies at a time of other uncertainties in the stock market and foreign trade. 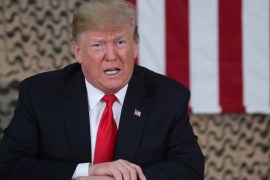 Donald Trump said the alternative to funding his controversial wall project would be total separation from Mexico. 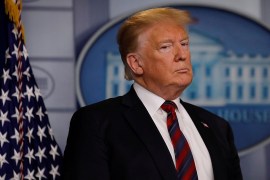 Top politicians, Trump to meet as shutdown hits two-week mark without signs that either side will budge on wall funding. 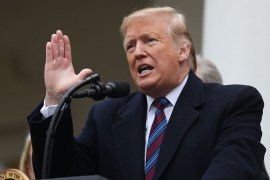 Trump threatens to declare a national emergency to get wall built if Democrats do not give him the $5bn he’s requested.