Chinese President Xi Jinping has said that no one can change the fact that Taiwan is “part of China”, adding that Beijing will not give up the use of military force as an option to ensure “reunification”.

Xi made the comments on Wednesday in a speech marking the 40th anniversary of a policy statement that eventually led to a thaw in relations with the self-ruled island.

“We are firmly against those who conspire behind the ideo of ‘Two China’, or ‘One China-One Taiwan’, or Taiwan Independence,” Xi said in a part of his first major speech addressing the people of what Beijing considers a breakaway province.

“We have achieved great victory on defeating any pro-independence or separatist activities. Nobody, and no party, can change the historical and legal that Taiwan is part of China and that both sides of the strait belong to China,” Xi said in Beijing.

China “reserves the option of taking all necessary measures” against outside forces that interfere with peaceful reunification and Taiwan independence separatist activities, he added.

His speech came a day after Taiwan President Tsai Ing-wen called on China to seek a peaceful solution over their differences, insisting people on the island want to maintain self-rule.

“I would like to call on China to face squarely the reality of the existence of the Republic of China on Taiwan,” Tsai said in a New Year’s Day address, referring to the island’s formal name.

She added that the two sides of the Taiwan Strait needed a pragmatic understanding of the basic differences that exist between them in terms of values and political systems.

China “must respect the insistence of 23 million people on freedom and democracy, and must use peaceful, on parity means to handle our differences”, Tsai said.

Graham Ong-Webb, research fellow at the S. Rajaratnam School of International Studies at Nanyang Technological University, said Xi’s remarks on Wednesday were “consistent” with the “message put out by the Chinese government over the last 40 years under the tenure of a string of premiers”.

He noted, however, that the Chinese president in recent years has been delivering “the same message albeit in a more sharp and firm stance for various reasons.”

“At the end of the day, there is a timeline when it comes to reunification and the Chinese government has to achieve this goal at some stage,” Ong-Webb told Al Jazeera from Singapore.

The Chinese government has heaped pressure on Tsai since she took office in 2016, cutting off dialogue, whittling down Taiwan’s few remaining diplomatic allies and forcing foreign airlines to list Taiwan as part of China on their websites.

It fears Tsai wishes to push for Taiwan’s formal independence, though Tsai says she wants to maintain the status quo. Beijing has regularly sent military aircraft and ships to circle the island on drills.

China’s interference in the island’s political and social development is “Taiwan’s biggest challenge at the moment”, Tsai said on Tuesday.

Beijing denies any interference in Taiwan’s internal affairs. It views Taiwan as a wayward province, to be brought under its control by force if needed, with no right to international recognition as a separate political entity.

Democratic Taiwan has shown no interest in being ruled by autocratic China.

Liu Jieyi, head of China’s Taiwan Affairs Office, said in his new year’s message they had not wavered last year in the face of “deliberate provocations” from Taiwan’s government.

“Although the way ahead won’t all be plain sailing, we have the confidence and the ability to vanquish risks and challenges,” he said in a statement on the office’s website.

Xi’s speech marked 40 years since a message sent to Taiwan in 1979, in which Beijing called for unification and an end to military confrontation.

In January 1979, Beijing declared an end to what had been routine artillery bombardment of Taiwan-controlled offshore islands close to China and offered to open up communications between the two sides, after decades of hostility.

Chiang Kai-shek fled with defeated Nationalist forces to Taiwan in December 1949 after losing a civil war to the Communists.

Despite the deep business, cultural and personal links which exist today, no peace treaty or formal end to hostilities has been signed

Taiwan is gearing up for presidential elections in a year’s time. Tsai’s pro-independence Democratic Progressive Party suffered stinging losses to the China-friendly Kuomintang in mayoral and local elections in November.

Looking ahead, Ong-Webb said that “things are going to be a bit choppy” between China and Taiwan over the next year or so.

“We have to look to the 2020 general elections, which is what the Chinese government is doing to see how they can shake the ground to get the outcome that they want which is to have the nationalist Kuomintang party come back to power.” 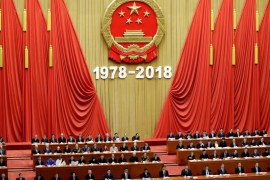 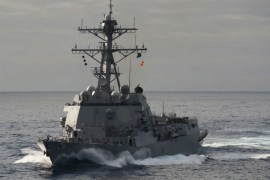 It’s the third time this year American vessels entered the strait in a move certain to stoke tensions with China. 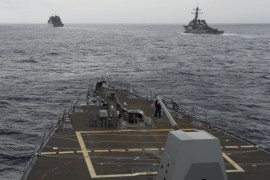 Is a US-China war in Asia inevitable?

Chinese and American officials increasingly talk about war over Taiwan and the South China Sea – could it really happen?