Sao Paulo – Brazil’s far-right president, Jair Bolsonaro, was sworn in on Tuesday during a ceremony in the capital Brasilia, likely marking the beginning of a hard conservative shift in governing Latin America‘s largest economy and most populous nation.

Bolsonaro was elected president at the end of October, defeating his rival Fernando Haddad of the centre-left Workers’ Party by a comfortable margin in the second-round runoff.

“We have a unique opportunity to rebuild our country,” Bolsonaro said in his first speech in Brazil’s National Congress after being sworn in.

The speech also contained nods to other campaign promises such as combatting what he sees as the spread leftist ideology in schools, loosening gun ownership laws and a hardline stance on law and order.

“Brazil above everything and God above everyone,” he finished – his trademark line throughout the campaign.

Bolsonaro has pledged to crack down on crime, tackle corruption and restore traditional family and Christian values in a country that, according to him and many of his supporters, echoing the “anti-globalist” rhetoric of the global authoritarian right, has been besieged by “cultural Marxism”.

Meanwhile, human rights experts, political rivals and environmentalists have expressed grave concern over Bolsonaro’s promises to give police “carte blanche” to kill suspects, “cleanse” the country of left-wing “outlaws” and open up the country’s vast Amazon region to mining interests.

Tuesday’s inauguration took place under a heavy security presence including snipers and anti-aircraft missiles. In September, Bolsonaro was the target of a failed assassination attempt when he was stabbed at a campaign rally.

Those attending Tuesday’s event included Hungary’s Viktor Orban and Israel’s Benjamin Netanyahu, with whom Bolsonaro met this week and is in talks with about moving Brazil‘s Israeli embassy to Jerusalem.

United States President Donald Trump, of whom Bolsonaro is an outspoken admirer, did not attend and instead sent a delegation led by US Secretary of State Mike Pompeo.

Trump congratulated Bolsonaro on Twitter, saying the “U.S.A. is with you!”

Supporters travelled from cities across Brazil to witness the ceremony, some of whom went in overnight buses via paid travel and accommodation packages set up by online Bolsonaro fan groups.

Some were filmed performing group push up sessions in a nod to Bolsonaro’s military history, while many others made his signature gun-finger gesture and one crowd of supporters was filmed chanting “Whatsapp” and “Facebook” in support of Bolsonaro’s distaste for traditional media.

In his second address on Tuesday, Bolsonaro spoke to the crowds on Brasilia’s Esplanada of Ministries to shouts of his nickname “legend” and was joined by his Vice President General Hamilton Mourao.

At the end of the speech, Bolsonaro gripped a Brazilian flag and said, “This is our flag, which will never be red. Only if it takes our blood to keep it green and yellow.”

A former army captain and outspoken supporter of Brazil’s 1964 -1985 military dictatorship, during which time hundreds of political opponents were executed and thousands more tortured, until recently, Bolsonaro was largely considered a fringe politician best known for disparaging remarks against LGBT people, minorities and women.

But amid a backdrop of economic crisis, rising violence and corruption scandals that stained all of Brazil’s main political parties, Bolsonaro cultivated an image as the outsider candidate and swept to victory in an election fuelled by anti-establishment sentiment.

He has promised to crack down on crime; giving police greater rights to kill suspects, enacting harsher punishments for criminals and allowing law-abiding citizens greater access to guns. Such promises have appealed to swaths of the electorate in a country that saw more than 63,000 homicides last year.

Bolsonaro has also promised to tackle corruption by ending the traditional horse-trading style of politics associated with the halls of power in Brasilia where coveted positions such as ministries were doled out to party power brokers in exchange for support for bills.

However, many analysts point out that such campaign promises are likely to be less easy to deliver given the realities in Brazil’s complex and fractured political landscape.

“It’s not credible that this system is going to end just because there is a new president,” said Oliver Stuenkel, a professor of international relations at the Fundacao Getulio Vargas Foundation in Sao Paulo.

“Bolsonaro’s party doesn’t have a majority, I think that they will have a very steep learning curve,” he told Al Jazeera.

Having risen to victory on an anti-corruption platform, alarm bells have rung in recent weeks as it was revealed that a former aide to Bolsonaro’s oldest son Flavio, a state legislator for Rio de Janeiro and recently elected senator, is at the centre of unanswered payments probe. 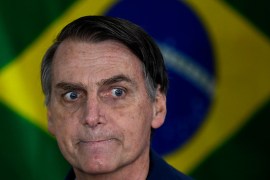 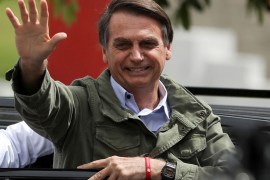 Where is Brazil headed under Bolsonaro? 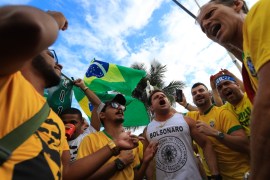