A Myanmar court has sentenced two Reuters news agency journalists to seven years in prison for illegal possession of official documents, a ruling that comes as international criticism mounts over the military’s alleged human rights abuses against Rohingya Muslims.

Wa Lone and Kyaw Soe Oo, who investigated the massacre of 10 Rohingya men, had pleaded not guilty to violating the colonial-era Official Secrets Act, punishable by up to 14 years in prison.

They contended they were framed by police.

“It directly threatens our democracy and freedom of the press,” he said as he was driven away along with Kyaw Soe Oo to begin their sentence.

“I would like to say it’s very disappointing as it’s destroyed the system [democracy] of our country and the way we would like to be. We will continue to face it.”

He said the time served since the two reporters were detained on December 12 would be taken into account. The defense can appeal the decision to the regional court and then the supreme court.

As the judge spoke, several reporters cried as they took notes.

Kyaw Soe Oo’s wife, Chit Su Win, burst into tears after the verdict, and family members had to support her as she left the court.

Al Jazeera’s Wayne Hay, reporting from Bangkok in neighbouring Thailand, said that “throughout the course of this trial there was very little, if anything, in the way of credible evidence that could justify such conviction”.

The reporters had told the court two police officials handed them papers at a restaurant in the city of Yangon moments before other officers arrested them.

One police witness testified the restaurant meeting was a set-up to entrap the journalists to block or punish them for their reporting of a mass killing of Rohingya Muslims in Rakhine.

After his testimony, the officer was jailed for a year for violating police regulations and his family was kicked out of police housing.

Other testimony by prosecution witnesses was contradictory, and the documents presented as evidence against the reporters appeared to be neither secret nor sensitive.

The journalists testified they did not solicit or knowingly possess any secret documents.

“Today is a sad day for Myanmar, Reuters journalists Wa Lone and Kyaw Soe Oo, and the press everywhere,” Reuters editor in chief Stephen J Adler said in a statement.

“We will not wait while Wa Lone and Kyaw Soe Oo suffer this injustice and will evaluate how to proceed in the coming days, including whether to seek relief in an international forum.”

Wa Lone and Kyaw Soe Oo both testified they suffered from harsh treatment during their initial interrogations.

Their several appeals for release on bail were rejected. Wa Lone’s wife, Pan Ei Mon, gave birth to the couple’s first child in Yangon on August 10, but Wa Lone has not yet seen his daughter.

Many nations, including the US, UK, Denmark and Bangladesh, as well as human rights group have called for the reporters’ immediate release.

Speaking to Al Jazeera, Robertson said Myanmar’s military, also known as the Tatmadaw, wanted a guilty verdict against the two reporters in order to “intimidate” other journalists to avoid reporting on human rights violations by the army.

“This is clearly a situation when the Tatmadaw has won the day,” he said.

“This is a court system that has been very close to the Burmese military, [and] has done its dirty work in the past. We do not really see the kind the of independent judiciary that we would expect in a modern democracy.”

The verdict comes amid mounting pressure on the government of Nobel laureate Aung San Suu Kyi over a security crackdown sparked by attacks by Rohingya Muslim insurgents on security forces in August 2017.

It also comes a week after the release of an explosive United Nations-led study into abuses in Rakhine, accusing Myanmar’s army chief of heading a campaign of “genocide” and “crimes against humanity” against the Rohingya.

About 700,000 Rohingya fled to neighbouring Bangladesh to escape the violence targeting them after attacks by Rohingya figthers killed a dozen members of the security forces.

UN investigators said genocide charges should be brought against senior Myanmar military officers over the crackdown, and strongly criticised Suu Kyi for failing to use her moral authority to stand up for the stateless minority.

The same day, Facebook shut down the pages of Myanmar’s army chief Min Aung Hlaing and other military top brass, in what the company said was a bid to prevent them from further fanning “ethnic and religious tensions”.

The accusation of genocide was rejected by Myanmar’s government, but is the most serious official recommendation for prosecution so far.

Dozens of journalists and pro-democracy activists marched Saturday in Yangon, Myanmar’s biggest city, in support of the reporters.

This is a major step backward in Myanmar's transition to democracy, cannot be squared with the rule of law or freedom of speech.

“The United Nations has consistently called for the release of the Reuters journalists and urged the authorities to respect their right to pursue freedom of expression and information,” he said.

“Wa Lone and Kyaw Soe Oo should be allowed to return to their families and continue their work as journalists.” 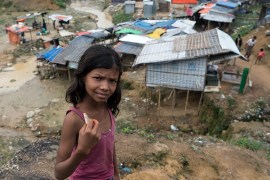 New infrastructure in Bangladesh’s Rohingya camps, coupled with a stalled repatriation deal, spell out a permanent stay for refugees. 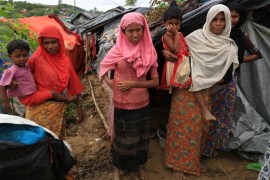 The government denies any allegations of purported genocide of Muslim-majority Rohingya by Myanmar armed forces.