Off the Libyan coast, not far from Benghazi, is a developing threat: a potential Mediterranean cyclone, or “medicane”.

On Thursday, gale warnings were issued for Greece’s Crete and southern Italy, including Sicily. For the island of Malta, strong winds and pounding waves were expected.

Over the next three days, this medicane will likely strengthen as it moves into the Ionian Sea, across southern Greece and Crete, and then into the southern Aegean – making a Sunday evening landfall in western Turkey.

Flooding, landslides, wave erosion, thunderstorms and severe gales are all likely for the countries and islands currently under early warning conditions.

True hurricanes cannot form in the Mediterranean Sea, for various reasons of physics. However, cyclones with similar characteristics can and do occur occasionally. Indeed, I steamed through one in 1980, encountering giant waves and winds in excess of 100km/h.

The start of this cyclone was a series of violent thunderstorms that brought downpours to Tunisia and northern Libya. Flash flooding swept through Nabeul, Tunisia, over the weekend, taking four lives.

These thunderstorms repeatedly regenerated as the warm waters of the Gulf of Sirte kept feeding in both energy and water vapour. Even on Wednesday night, 93mm of rain was recorded as falling on Medinine, southern Tunisia, on the main road to Tripoli, Libya.

The centre of circulation, as of Thursday, was just off the coast from Benghazi, eastern Libya. The boost came from a rapid cooling of the air above the central Mediterranean. A cold front swept across Eastern Europe on Tuesday, dropping temperatures by up to 14 Celsius at ground level. Although the contrast overland is now fuzzy, the air aloft is much cooler.

Warm air rises, the proof being in the clump of thunderstorms now over the coast of Libya. If you cool the air above even more, it rises even more rapidly and (physics again) starts to spin. This ultimately can lead to a sub-tropical cyclone, or “medicane”, which is what is expected to happen in this case. 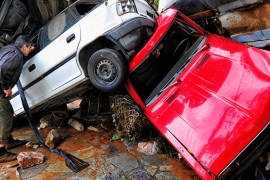 Storm Numa forms in the Mediterranean

A medicane forms in the Ionian Sea and leaves at least 19 people dead Greece.