Israeli Prime Minister Benjamin Netanyahu accused Iran on Thursday of keeping a “secret atomic warehouse” just outside its capital and called on UN nuclear inspectors to carry out inspections.

Holding up enlarged images before world leaders at the UN General Assembly, Netanyahu said Iranian officials were keeping tonnes of nuclear equipment and material in a warehouse, in violation of the 2015 nuclear deal.

He said the materials were meant to keep it from obtaining nuclear weapons.

Netanyahu’s disclosure – which he presented as a big reveal on the international community’s biggest stage – came four months after he announced the existence of what he said was a “half-tonne” of Iranian nuclear documents obtained by Israeli intelligence from a government facility in Tehran.

The prime minister said the cache proved Iranian leaders covered up their nuclear weapons programme before signing the nuclear agreement.

Iran has not acknowledged the alleged seizure.

“The reason Iran did not destroy its atomic archive and its atomic warehouse is because it hasn’t abandoned its goal to develop nuclear weapons,” he said.

“Israel will never let a regime that calls for our destruction to develop nuclear weapons,” Netanyahu added.

“What Iran hides, Israel will find.”

‘Not a lot of detail’

The new site Netanyahu identified sits a short distance from Shourabad district outside the capital, Tehran.

There was no immediate official response from Tehran. Iran’s mission to the UN did not respond to a request for comment.

Iran’s state-run, English-language Press TV channel carried Netanyahu’s remarks live, but cut away after he made the allegation about the nuclear warehouse.

Al Jazeera’s senior diplomatic editor, James Bays, said Netanyahu’s “single focus” on Iran because Israel is “getting what it wants at this stage” from the Trump administration on the issue of Israeli-Palestinian conflict.

Bays noted nuclear experts had previously pointed out there was “nothing new” about Netanyahu’s presentation in April, adding “there is not a lot of detail” in his presentation on Thursday.

The 2015 Iran nuclear deal came after years of Western sanctions over the country’s contested atomic program. The West long has feared it could be used to build nuclear bombs. Iran long has denied seeking atomic weapons.

Under terms of the deal, Iran is allowed to keep documents and other research.

The deal strictly limits how many centrifuges Iran can use and how large of a low-enriched uranium stockpile the country can keep.

He said Israel shared the information with the UN atomic watchdog, the Vienna-based International Atomic Energy Agency. The agency did not immediately respond to requests for comment. 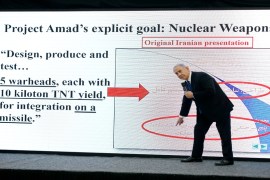 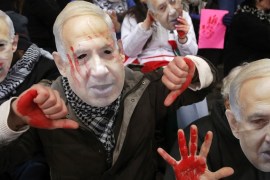