US President Donald Trump and his Iranian counterpart Hassan Rouhani clashed sharply at the UN General Assembly on Tuesday, with the former urging the international community to isolate Tehran from global trade, and the latter calling US sanctions “economic terrorism”.

Weeks of speculation about a possible breakthrough meeting devolved into a war of words over Trump’s decision to withdraw from the 2015 nuclear deal and to reimpose economic sanctions on Iran.

Trump fired the first volley, repeating his administration’s contention that Iran is the world’s “leading sponsor of terrorism”.

“Iran’s neighbours have paid a heavy toll for the regime’s agenda of aggression and expansion,” Trump said, accusing Iranian leaders of having “embezzled billions of dollars” from the country’s treasury to wage proxy wars.

“The dictatorship used the funds to build nuclear-capable missiles, increase internal repression, finance terrorism, and fund havoc and slaughter in Syria and Yemen,” he said.

“We ask all nations to isolate Iran’s regime as long as its aggression continues.”

Trump promised Iran would face more economic difficulties when the second round of sanctions targeting the energy sector snap back on November 5.

Rouhani later hit back at Trump saying his decision to impose more sanctions is a form of “economic terrorism”, accusing the US administration of trying to topple his government.

“It is ironic that the US government does not even conceal its plan for overthrowing the same government it invites to talks,” Rouhani said.

Without directly naming Trump, he said some world leaders are undermining world security by their “recklessness and disregard of international values and institutions”.

“Confronting multilateralism is not a sign of strength, rather a symptom of the weakness of intellect,” he said.

“The government of the US – at least the current administration – seems determined to render all international institutions ineffectual,” he said.

In May, the Trump administration pulled out of the historic 2015 deal designed to prevent Iran from building a nuclear bomb. In August, the first round of US sanctions were reimposed on Iran.

There was speculation whether the two leaders would meet in New York City, after Trump said he would be willing to meet without preconditions.

But Rouhani said in interviews Iran would not be willing to hold talks with the United States, until it decides to return to the 2015 nuclear deal, also known as the Joint Comprehensive Plan of Action (JCPOA).

The five remaining parties to JCPOA – France, Britain, Germany, China and Russia – agreed during a meeting in New York late on Monday to set up a payment system to preserve business ties with Iran despite US sanctions.

The Iranian leader said he was pleased the international community did not follow the Trump administration’s “unilateral and illegal withdrawal from the JCPOA”. 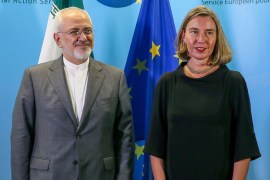 Five world powers and Iran agree to set up legal entity to circumvent US sanctions after Trump pullout from 2015 deal.

US: Iran still the ‘leading state sponsor of terror’

Annual State Department report admonishes Tehran for assisting ‘terrorists’ as attacks down for second year in a row.