President Hassan Rouhani has declared that Iran cannot enter talks with the “untrustworthy” administration of US President Donald Trump as long as Tehran is under the shadow of economic sanctions.

Rouhani made the comments in a televised interview on Monday evening, just hours before the first round of unilateral “snap back” US sanctions take effect on Tuesday.

“You cannot expect to talk to a person after you stab him and leave the knife in his body,” Rouhani, speaking in Persian, told IRIB state television.

He said the United States proved to be an unreliable negotiating partner when it decided to withdraw from a multinational nuclear deal with Iran and reimpose sanctions against it.

“If there is trust, Iran always welcomes negotiations,” he said. “But negotiations don’t make sense while we are under sanctions.”

In late July, Trump, who has repeatedly criticised Iran’s leaders, said he is willing to meet with them with no preconditions – even though US Secretary of State Mike Pompeo later walked back some of the president’s comments.

Speaking to IRIB, Rouhani said Trump’s offer to negotiate is aimed at “creating divisions” in Iran, accusing him of trying to launch “psychological warfare” against the Iranian people.

Earlier on Monday, Trump signed an executive order paving the way for the return of biting sanctions against Tehran on Tuesday.

The reimposed sanctions will target a range of sectors, blocking Iran from purchasing US banknotes and trading in gold and metals. They will also limit Iran’s access to the software and automotive sectors while blocking its ability to buy commercial aircraft or trade in food and other goods as well.

The US said the sanctions are aimed at exerting “maximum economic pressure” against Iran.

In a statement, the White House said the first round of sanctions will be reimposed on August 7. A second round of even more punishing sanctions targeting Iran’s massive oil industry will take effect on November 5.

“President Trump will continue to stand up to the Iranian regime’s aggression, and the United States will fully enforce the reimposed sanctions,” the White House statement said, maintaining that the 2015 deal was “defective at its core”.

“Over the recent months, the Iranian currency has been in freefall; inflation has been soaring; unemployment has been increasing; and, most importantly, people have lost hope,” he told Al Jazeera.

Under the breakthrough deal in Vienna, the Iranian government agreed to cut down its uranium stockpile and scale back its enrichment programme far below the level required to build a nuclear weapon.

But Obama’s successor Trump pulled out of the pact on May 8, fulfilling a 2016 campaign promise to withdraw from a deal which he once described as the “worst ever”.

In May, Pompeo warned those companies that they would be held to account by the US government. The White House statement on Monday also said that those who “fail” to abide by the US sanctions will “risk severe consequences”.

Still, Europe’s top diplomats vowed on Monday to work together to preserve the 2015 deal.

In a joint statement, EU foreign policy chief Federica Mogherini and the foreign ministers of France, Germany and Britain said the remaining parties to the 2015 agreement will maintain “effective financial channels” with Iran and ensure its continued export of oil and gas.

For his part, Rouhani praised Europe for “resisting the Americans” in its call “to join the regime of sanctions”.

But Majidyar noted the threat of sanctions had already forced major international companies and banks to scale down their activities in Iran. 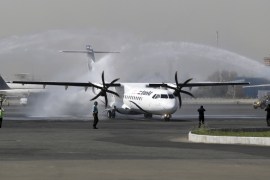 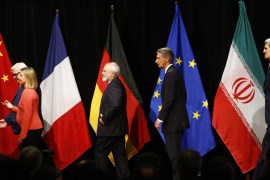