From the azure of the Mediterranean Sea in the south of France to the reindeer-grazing tundra of northern Finland, as well as from the UK in the west to Black Sea-bordering countries in the east, summer 2018 has been extraordinary.

Monthly and all-time records have been broken with an almost monotonous degree of regularity from May onwards.

Much of the continent has turned from green to brown; many of the green areas are only that way as a result of huge amounts of rain that has fallen in the severest storms seen so far this century.

Just when it looked as though there was nothing left for nature left to throw at the continent, the meteorological pattern is changing once again. The high-pressure system, or anticyclone, over Scandinavia is eroding, and at the same time pressure is building from North Africa, allowing extremely hot air from Morocco and Algeria to drift across the Iberian Peninsula.

In itself, this development will be enough to put many temperature records at risk. But a complicating factor, which makes extreme temperatures even more likely, is that a ridge of high pressure will develop across the UK, pushing the Iberian anticyclone southwards. This subtle change may induce some katabatic or foehn winds, which can wring all the moisture out of the air and cause temperatures to rise even further.

The current all-time maximum temperature recorded in Portugal is 47.4C set in Amareleja on August 1, 2003. Spain‘s record is 47.3C recorded on July 13 last year. Both records could fall as computer forecasts, which are inherently biased against extreme values, are predicting 48C to 50C across southeastern Portugal and southwestern Spain.

People who live in desert countries, such as Qatar, experience such temperatures on a regular basis. But widespread use of air-conditioning insulates residents from the worst of the heat.

These regions of Spain and especially Portugal are poor. Air-conditioning is not widely available. There are concerns that the very young, and particularly the elderly, will be vulnerable to heat stress in the next few days.

Much of the peninsula will be on high alert in the coming days and weeks, as the combination of extreme heat, low humidity and strong, gusty winds will result in a very high fire risk.

Last year’s wildfires in Portugal that killed 66 people in June will be fresh in the memory. October 2017 brought another 7,900 fires in the north of the region, resulting in the deaths of another 49 people.

Hopefully, both countries’ emergency services will be fully prepared for the weekend inferno. 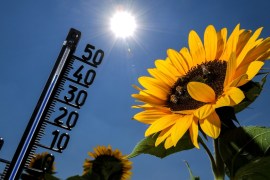 Extreme heat is expected to push into Iberia by the weekend. 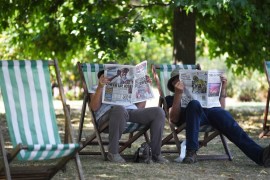 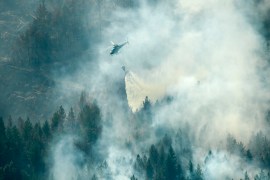 Scandinavia unprepared for worst drought in 74 years as wildfires rage and Stockholm asks for international assistance. 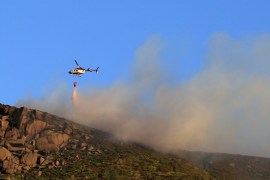 A major blaze is burning across moorland in the north of England.