Michael Cohen, the former personal lawyer of US President Donald Trump, has pleaded guilty to campaign-finance violations and other charges, saying he made payments to influence the 2016 election at the direction of a candidate for federal office.

Cohen, 51, appearing in federal court in Manhattan on Tuesday, pleaded guilty to five counts of tax fraud, one of bank fraud and two counts of violating campaign finance laws. He could get about four to five years in prison at the sentencing on December 12.

Questioned by the federal judge, Cohen said he had paid sums of $130,000 and $150,000 each to two women who claimed they had affairs with Trump, acting at his boss’s request, in a bid to buy their silence “with the purpose of influencing the election”.

Cohen did not specify the women’s names, but the sums correspond to a payment known to have been made to adult film star Stormy Daniels just before the election to silence her claims of a one-night stand with Trump – and another destined for former Playboy model Karen McDougal.

He also did not name Trump, but said was “in coordination and at the direction of a candidate for federal office”, and the other was made “under direction of the same candidate”.

In the charging documents, a press release and comments outside the court, prosecutors did not go as far as Cohen did in open court in pointing the finger at the president. Prosecutors said Cohen acted “in coordination with a candidate or campaign for federal office for purposes of influencing the election.”

Under federal law, an expenditure to protect a candidate’s political fortunes can be construed as a campaign contribution, subject to federal laws that bar contributions from corporations and set limits on how much can be donated.

After the court hearing, which ended with Cohen released on $500,000 bail, the lawyer wiped away tears as he gazed out a court window.

“This is obviously a huge admission with major implications for Trump,” Saloomey said.

Cohen’s account appears to implicate Trump himself in a crime, though whether – or when – a president can be prosecuted remains a matter of legal dispute.

Trump denied to reporters in April that he knew anything about Cohen’s payments to Daniels, though the explanation from the president and his lawyer Rudy Giuliani have shifted multiples times since. In May, Trump tweeted that Cohen was paid back through a monthly retainer, not campaign funds, for the Daniels payment. He also denied ever having an affair with the adult film star.

The president has fumed publicly about what he felt was government overreach.

Trump’s personal lawyer, Rudy Giuliani, noted in a statement on Tuesday that “there is no allegation of any wrongdoing against the president in the government’s charges against Mr Cohen.”

The Justice Department’s Office of Legal Counsel, which provides legal advice and guidance to executive branch agencies, has held that a president cannot be indicted while in office. There would presumably be no bar against charging a president after he leaves the White House.

Al Jazeera’s Saloomey noted that nothing at this point indicates that Cohen has agreed to cooperate with prosecutors.

Federal prosecutors in New York began investigating Cohen after a referral from US Special Counsel Robert Mueller, who has been investigating Russian meddling in the 2016 election and possible coordination with the Trump campaign.

The search of Cohen’s files sought bank records, communications with the Trump campaign and information on money payments made in 2016 to McDougal and Daniels.

The lawyer had gained notoriety as Trump’s loyal “fixer” before the FBI raid. Trump has branded the investigation a witch-hunt,” an assault on attorney-client privilege and a politically motivated attack by enemies within the FBI. But the president’s initial support for Cohen, who had previously said he would “take a bullet” for Trump, eventually degenerated into a public feud.

Deputy US Attorney Robert Khuzami said that in addition to the campaign finance violations, Cohen failed to report more than $4m in income between 2012 and 2016, including about $2.5m from interest payments on a personal loan and $1.3m from his taxi medallion holdings.

Cohen also lied to a financial institution by failing to disclose more than $14m in debt and obtaining a $500,000 home equity line of credit he wasn’t entitled to, Khuzami said. 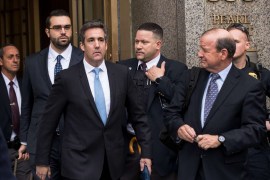