Japan and South Korea are bracing for two typhoons which are expected later this week.

The two storms, the 20th and 21st named storms of the West Pacific typhoon season, are still strengthening as they head north.

Typhoon Soulik is expected to hit the Korean Peninsula late on Wednesday after skirting around Japan’ s southern mainland island of Kyushu.

When it makes landfall, it is forecast to have winds gusting up to 200 kilometres per hour. Torrential rain is likely to cause flooding and a storm surge threatens to trigger coastal flooding.

Soulik will then begin to disintegrate as it heads across North Korea which lacks the resources to cope with severe weather.

It is likely that North Korea will fare worse from this storm than the South.

Meanwhile, Cimaron has developed within the last 24 hours and is currently a tropical storm with winds gusting to 90km/h.

The storm is currently strengthening and by the time it makes landfall in central Honshu, it is expected to be a typhoon with winds gusting over 165km/h.

The current forecast track would bring severe weather to the southern parts of Honshu on Thursday.

There are also concerns that the storm could bring flash flooding to the mountainous central region as it moves north across the island. 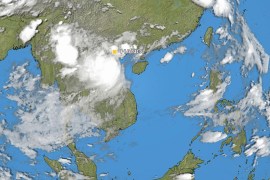 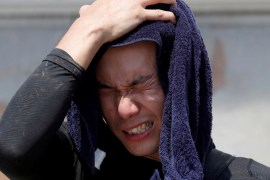 At least 14 dead in Tokyo as heatwave grips Japan

Extreme heat has made it more difficult for the victims of the devastating floods and landslides that hit two weeks ago. 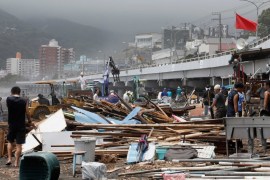 Minimal damage so far, but the tropical cyclone is strengthening again.