The death toll from the worst flooding to hit India’s Kerala state in a century has jumped to 357 with losses to infrastructure pegged at almost $3bn.

The idyllic tourist hotspot has been badgered by torrential monsoon rains since the end of May, triggering landslides and flash floods that have swept away entire villages.

“Since May 29, when the monsoon starts in Kerala, a total of 357 people have lost their lives until now,” a statement from the state’s information officer said on Sunday, with 33 losing their lives over the last 24 hours.

“According to preliminary estimates, Kerala’s losses due to the floods is 19,512 crore rupees ($2.9bn). Actual losses can be estimated only after the water recedes,” the statement said.

More than 350,000 people have taken shelter in 3,026 relief camps as thousands of army, navy and air force troops fan out to help those still stranded.

Roads and 134 bridges have suffered damage, isolating remote areas in the hilly districts of the state which are worst affected.

The state chief minister has requested more funding as well as 20 more helicopters and 600 motorised boats in order to step up the rescue efforts.

“The thing that is really needed, ironically, is water. Clean drinking water is much needed,” he said.

“They also need medicine for diarrhoea, rehydration powders and wipes to clean things.”

The Indian government has pledged $71m for victims of what state chief minister Pinarayi Vijayan called “the worst floods in 100 years”.

Randeep Kumar Rana of the national disaster response force told Al Jazeera the state government is working in coordination with the central government, and that the situation has increased significantly compared to two days ago.

“It has been very hectic. The flood situation is unprecedented in the history of India, but now the situation is improving in almost every affected area,” Rana said.

“The number of people who are yet to be evacuated has gotten very low, and if the situation continues to improve than maybe today there might not be any requirement for further evacuation.”

Rana could not provide a specific number of people that are still affected by the floods.

The amount of rain that has fallen is unexpectedly high this year, according to Al Jazeera’s senior meteorologist Steff Gaulter.

“Normally, by this point in the monsoon season, we expect to see about 1,649mm of rain. But this year it was 2,344mm. This is well over what we’d expect in the entire monsoon season, and we still have another month to go,” she said.

“This means that the difference between the amount of wet weather that has been seen in recent years and this year is even more marked than it would be otherwise and the result is plain to see.”

Rescue efforts have been impeded by the monsoon rains that continue to batter the region.

Residents were seen swimming and wading through chest-high waters past partially submerged homes.

The international airport in Kochi is also flooded and closed temporarily. 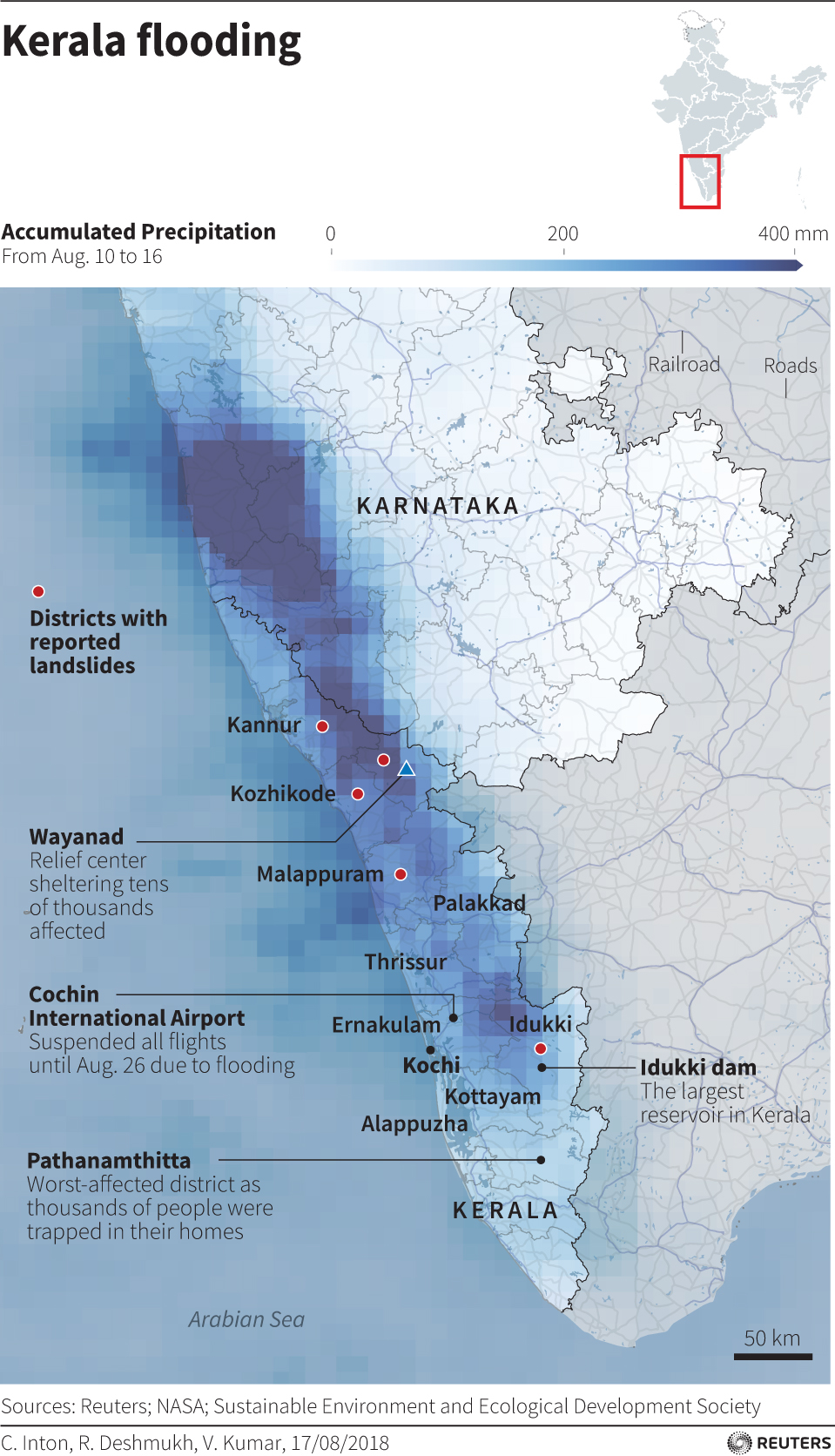