Pakistan Tehreek-e-Insaf (PTI) chief Imran Khan has declared victory in the general elections as results trickled in a day after the vote.

While Khan maintained a commanding lead, his party will not be able to form a majority government, according to official results from 95 percent of constituencies. A majority of 137 seats is needed to form a government.

Millions of Pakistanis flocked to polling stations to vote amid violence, including a suicide attack in the western city of Quetta that claimed at least 31 lives.

A European Union monitoring team said on Friday that the campaign for Pakistan’s general election this week featured a “lack of equality” that meant it was not a level playing field for all parties.

“Although there were several legal provisions aimed at ensuring a level playing field, we have concluded that there was a lack of equality and (of) opportunity,” Michael Gahler, chief observer of the EU Election Observation Mission, told a news conference in its preliminary assessment of the poll.

EU observer mission says overall, 2018 elections were "not as good" as 2013 elections, mainly due to warped pre-election environment. pic.twitter.com/GWn7JW2re1

The party of jailed ex-prime minister Nawaz Sharif has said elements of the powerful military suppressed its campaign and made accusations of rigging during the counting process after Wednesday’s vote.

For the first time 3 Hindu candidates won in #PakistanElectionResults2018 on general seats – one in NA and two for Sindh PA. All from PPP.

On Friday, Pakistan awaited the delayed results of general elections that have already seen a jubilant Imran Khan claim victory, despite allegations of massive vote-rigging in favour of the cricket icon-turned-politician.

Election officials are under fire for the lack of a result two days after ballots closed, an unprecedented delay that observers say has undermined the legitimacy of the exercise.

The Election Commission of Pakistan has dismissed allegations of manipulation – blaming the delay on glitches in new, untested counting software – and said there would be a result by Friday.

International observers, including a European Union delegation, are due to give their preliminary assessments of the vote on Friday, after rival parties, including the outgoing Pakistan Muslim League-Nawaz (PML-N), alleged “blatant” rigging.

Pakistan’s electoral commission is expected to announce the full results of a disputed election on Friday, paving the way for the winner, Imran Khan, to begin searching for coalition partners.

Although Khan appeared to fall short of the 137 seats needed for a majority in the National Assembly, his better-than-expected results mean he should have no problems forming a government with a handful of small coalition partners.

Provisional results released by the Election Commission of Pakistan (ECP) on Friday morning showed Khan’s Pakistan Tehreek-e-Insaf (PTI), or Pakistan Movement for Justice party, had won 109 seats out of the 251 races where counting had ended. The National Assembly has 272 seats in total.

Congratulations @ImranKhanPTI for your tremendous struggle of 22 years for the people of Pakistan. May Allah protect you , guide you and help you fulfil your promises to the green and white in our flag 🇵🇰#ElectionResults2018 #ImranKhanPrimeMinister

Pakistan-India talks on the cards?

‘We will run Pakistan like it’s never been run before’

"Imran Khan is new, we should give him a chance. But we'll only know how he is for sure once he takes office," says Muhammad Sultan, 28, a rickshaw driver who didn't vote. pic.twitter.com/hK4hbHXK9o

"We've seen the other two parties, now [Imran Khan's] got a chance," says Shaukat Ali, 55, an ice factory worker in Lahore's Icchra neighbourhood who voted for the PML-N. "If he benefits the people, the that's great." pic.twitter.com/6A0j1O2tHK

This is the result of 22 years of conviction , relentless efforts , determination and not giving up!
Congratulations @ImranKhanPTI You have done it!!!#PrimeMinisterImranKhan #NayaPakistan #ElectionPakistan2018Results

Well done to the new PM of Pakistan @ImranKhanPTI all the best. #Letsmakepakistanbetter pic.twitter.com/bo7YqSuhbC

Congrat PTI and @ImranKhanPTI on a truly historic victory! The 22 yr old struggle has finally paid off & deservedly. Pakistanis have a lot of expectations from u I really hope u lead from the front! I request all opposing parties& media to accept the result and help rebuild 🇵🇰

Congratulations Pakistan!! I feel now we have a chance at a brighter future. Goodbye status quo, goodbye self-serving corrupt politicians. Let's hope we can transform into an Asian Tiger in the next 10 yrs. #ElectionResults #PrimeMinisterImranKhan #ElectionsPakistan2018 #Pakistan

22 years later, after humiliations, hurdles and sacrifices, my sons’ father is Pakistan’s next PM. It’s an incredible lesson in tenacity, belief & refusal to accept defeat. The challenge now is to remember why he entered politics in the 1st place. Congratulations @ImranKhanPTI

Pakistan Muslim League (Nawaz) wholly rejects the results of General Elections 2018 due to manifest & massive irregularities. Form 45 was not given to our agents, results were stopped & votes were counted in the absence of our poll agents. This is both unbearable & unacceptable!

It’s now past midnight & I haven’t received official results from any constituency I am contesting my myself. My candidates complaining polling agents have been thrown out of polling stations across the country. Inexcusable & outrageous.

Results to be in ‘soon’

Election Results will be transmitted through the fastest and modern system.
According to the Election Commission, Results Transmission System (RTS) is linked to 80,000 polling stations across the country. pic.twitter.com/2AYNmeAiFF

The wait goes on

Pakistan goes to the polls today for it’s 3rd successive democratic #election
Yes, there is violence, corruption & extremism but each election is a step closer to the democracy & development the people deserve !!! #Election2018

Today,s whether shows that God has showered blessing to Pakistan on the day of Election. Surely, this election will establish new Pakistan

And some outside Pakistan…

Happy Election Day Pakistan, you maddening, beautiful, crazy, beloved old friend.
Here’s hoping the people who count your votes, let your vote count. And you get the leader you believe in.
Pakistan Zindabad!

Thank you fellow Pakistanis. World has seen your love & respect for Pak Armed Forces & LEAs today. U hv rejected all kinds of malicious propaganda. We are strong because we have your unflinching support. Our lives are dedicated to Pakistan and its People.
🇵🇰Pakistan wins again! pic.twitter.com/MGbujoGjZk

Women in Bayzai sub-division of Mohmand Tribal District (ex-Fata), 5 kilometres from the Afghan border got out to vote for the first time. (My hometown as well) #GeneralElection2018 pic.twitter.com/uTgBr2xMQ3

Spirits are high in Lahore (in a typical Lahori style)
Punjab province-the heartland of politics in Pakistan-hotly contested between #PMLN led by Nawaz Sharif's brother Shahbaz and #PTI led by Imran Khan. Nawaz Sharif & his daughter are in jail but still have support @AJEnglish pic.twitter.com/KLWZX1z9cG

800,000 security personnel deployed for #ElectionPakistan2018
371,000 soldiers at the request of the Election Commission of #Pakistan.
They're meant to assist in conduction impartial, free and fair polls.
After criticism ECP took back magisterial powers from soldiers @AJEnglish pic.twitter.com/eUMZgGRb5z

Voices from the streets of Lahore:

Here's what you need to know about Pakistan's election day blast that killed at least 29 people. pic.twitter.com/YqyJT4YlnM

Condemnable terrorist attack in Quetta by enemies of Pak seeking to disrupt our democratic process. Saddened by the loss of innocent lives. Pakistanis must defeat the terrorists' design by coming out in strength to cast their vote.

Been roaming the streets of Lahore's NA125 constituency all morning. Seeing a slow, steady stream of voters, but no big crowds or lines. Compared to the by-poll here in September, voter numbers seem small, at least so far. pic.twitter.com/museV3qYqZ

In Lyari, where it seems to be still PPP dominant. pic.twitter.com/fI5U9dNYHZ

Voting under way in Lahore

Shehbaz wasn't the first voter in line at this polling station, though. That honour goes to Zafar Mehdi, a 73-year- old schoolteacher.
"I'm always the first to vote in my area," he says. (He was in and out in 15 minutes.) #ElectionPakistan pic.twitter.com/v04TeItfBu 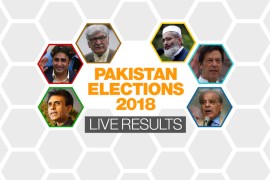 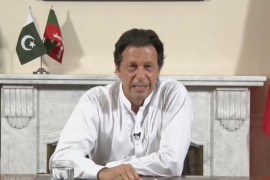 Complete transcript of the victory speech by PTI chairman and election frontrunner as he addresses nation from capital. 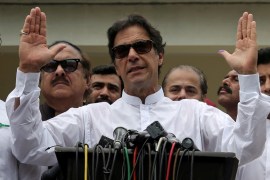 It will not be an easy ride for the new political leadership that will take over in post-election Pakistan.