It is possible the rain from tropical storm then depression Son-Tinh contributed to the collapse of a hydroelectric dam in Attapeu province, Laos.

The dammed river is a Mekong tributary and has been draining the land further north. Northern Vietnam and Laos have suffered heavy rain, deadly floods and landslides during the last week.

The final warning for Tropical Storm Son-Tinh has now been issued. It’s been around for about 10 days, forming in the Philippine Sea and heading past Luzon and straight for northern Laos. That journey took four days, then it turned around, followed the Red River down to the gulf’s waters, glanced off Hainan island doing another u-turn, and headed back inland.

Son-Tinh is the ninth named storm of the season.

Typhoon Son-Tinh was a cyclone that brought devastation to the Philippines in October 2012. Locally it was known as Ofel. This year, the local name was Henry and over the Philippines, the rain fell heavily.

Subic Bay reported 322mm from this cyclone, adding to the already developing floods in Luzon.

The bigger story of Tropical Cyclone Son-Tinh is and may still be in northern Vietnam and Laos. Phu Lien, on the floodplain of the Red River and its many branches, recorded 348mm of rain from this cyclone in the three days of Thursday, Friday and Saturday.

The heavy rain caused flooding and landslides in many areas, including the capital, Hanoi. The Vietnamese government said on Sunday that 32 people were killed and 17 were missing.

More than 5,000 buildings were destroyed or washed away, and about 82,000 hectares of farmland have been inundated. The Vietnam National Committee for Search and Rescue said in a report nearly 17,000 animals were killed nationwide.

Yet, that was not the end of Son Tinh. It went back out into the Gulf of Tonkin on Saturday to take in more energy from the warm surface waters. Hainan was hit by gales and heavy rain – typically about 150mm, then Son Tinh turned to the northwest and entered the Chinese province of Guangxi.

Its final act will likely be to deposit up to 250mm more rain onto southwest China, specifically Guangxi and Yunnan. Maybe this time, the headwaters of the Mekong and its tributaries will be spared. 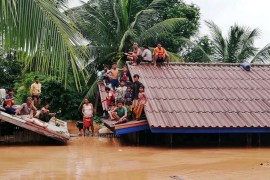