Violent tensions between Cameroon’s government forces and Anglophone separatists have forced more than 180,000 people from their homes since December, Human Rights Watch said, in a new report that blames both sides for “grave abuses” against civilians.

The US-based rights group said in a report on Thursday that separatists had carried out kidnappings, killed civilians and prevented children from going to school in Cameroon’s two English-speaking regions.

Government forces were blamed for killing civilians, using excessive force against demonstrators, torture and the burning of homes in several villages, the report said, based on interviews and documents.

Among the dozens of victims interviewed for the report was a man who described finding his 69-year-old mother’s remains among the ashes of his home after a military operation in the northwest. While his wife and children fled, his mother had been unable to follow, he said.

Cameroon’s northwest and southwest have faced unrest since 2016 when teachers and lawyers held demonstrations demanding respect for the region’s English education and justice systems.

The government responded with force, and even though an agreement was reached with lawyers and teachers’ unions last year, armed separatists emerged seeking an English-speaking state in the largely French-speaking country.

In a response to the HRW report, the government in Yaounde acknowledged that it had arrested 965 people since the beginning of the crisis in 2016 and that 114 had faced trial, including 30 who were acquitted.

Charges were dropped in 103 cases, leaving hundreds more in jail.

Election up in October

“The human rights situation in Cameroon has reached crisis level and could still get much worse,” said Mausi Segun, Africa director at HRW.

Segun called for international action to prevent further escalation of the crisis.

As of May, at least 160,000 people were driven from their homes in the violence, with 80 percent of them hiding in the forests, said the report. A further 20,000 Cameroonians have sought refuge in Nigeria.

In its response, the government rejected allegations that its security forces had resorted to heavy-handed tactics, saying that the use of force “remains proportionate to the extent of the threat”.

A review of satellite images of 131 villages in the southwest region found evidence of arson in 20 of them, with some 1,800 buildings destroyed.

Years of resentment at perceived discrimination at the hands of the francophone majority have led to almost daily acts of violence and retribution.

Warnings about Cameroon’s crisis are growing as the Central African nation faces an October election in which 85-year-old President Paul Biya, in power since 1982, says he will run again. 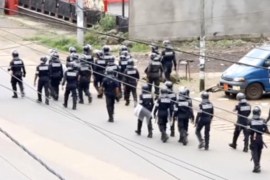 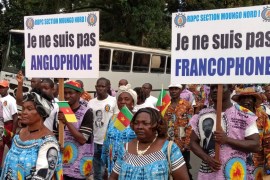 How will Cameroon fix its language divide?

English speakers in Cameroon are demanding an end to what they say is discrimination by the French-speaking majority. 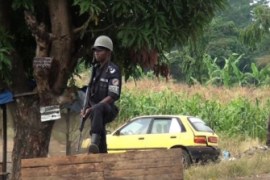 Is Cameroon hurtling towards civil war?

As violence escalates in the Anglophone region, calls for dialogue grow louder. 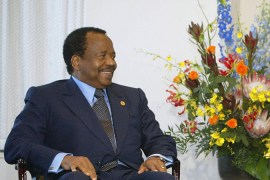 The 85-year-old has been head of state since 1982 and his re-election could see him rule well into his 90s.