Speaking to the UK tabloid The Sun, Trump said a potential trade deal would “most likely” fail if May’s strategy was implemented because the US would be “dealing with the European Union instead of dealing with the UK”.

“If they do that, their trade deal with the US will probably not be made because we have enough difficulty with the European Union,” Trump told The Sun.

He also said he told May “how to do it”, but that she “didn’t listen” and “wanted to go a different route”.

The comments were published on Thursday as May hosted an elaborate state dinner for the president and his wife Melania in honour of their arrival in the country.

It’s a blow May doesn’t need as she tries to sell her Brexit strategy to Tory conservatives, many of whom say it doesn’t secure British independence from the European Union.

Asked about the comments, a spokesperson said May was “looking forward to sitting down with Trump to talk him through the Brexit negotiating stance”.

After The Sun story was published, White House spokeswoman Sarah Sanders said the president “likes and respects Prime Minister May very much,” adding that he said in the interview she “is a very good person,” and that he “never said anything bad about her”.

‘Boris Johnson would be a great PM’

In another setback, however, Trump also praised the plan’s chief critic, Brexiteer Boris Johnson, saying he was “a very talented guy”.

“I’m just saying I think he would be a great prime minister,” Trump told The Sun.

Johnson was one of a handful of top party officials, including Brexit Minister David Davis who have resigned in the wake of the deal, which May had claimed was agreed upon after a twelve-hour crisis meeting last Friday.

May has defended the plan, saying it delivers “on the vote of the British people to take back control of our money, our laws and our borders.”

Al Jazeera’s Laurence Lee, reporting from Chequers where Trump and May are meeting on Friday, said “you have to ask yourself, who is likely to benefit from Trump saying any deal would likely be off if May’s Brexit strategy was implemented”.

“Clearly, the really hard Brexiters, the people who regard Theresa May as being a traitor, for keeping any sort of deal going with the EU, they’re going to love this,” Lee said.

“But the other people who will be saying this is really good news for us are the ‘remainers’ in the European Union, because when the UK delegation goes to Brussels next week to sell the idea that it’s going to be really difficult for the EU to resist the temptation to say to them ‘look, you think dealing with us is difficult, how do you feel about dealing with him?'”

Blaming immigration for violence is ‘preposterous’

Trump also commented on European immigration policies as protests continue back home against his hardline immigration strategy, which saw the separation of parents from their children.

“I think it changed the fabric of Europe, and unless you act very quickly, it’s never going to be what it was, and I don’t mean that in a positive way. So I think allowing millions and millions of people to come into Europe is very, very sad. I think you’re losing your culture.”

Responding to the comments, London Mayor Sadiq Khan said it was preposterous to blame a rise in violent crime in the city on immigration.

“The idea that you can blame this on immigration from Africa is I think preposterous and we should call him out when he does so,” Khan told the BBC on Friday.

May and Trump will formally meet for talks on Friday.

On Thursday night, hundreds of demonstrators chanted outside the US ambassador’s residence where Trump was staying on the outskirts of London, providing a preview of the large protests expected on Friday.

Trump told The Sun he felt unwelcome because of the protests, including plans to fly a giant balloon over Parliament on Friday that depicts him as an angry baby.

Organisers behind the giant six-metre-high balloon were given permission by London’s city hall to fly the balloon over parliament square gardens. They raised 18,000 British pounds (almost $24,000) from crowdfunding.

Trump’s schedule will largely keep him out of central London, however.

His meeting with May will take place in her Chequers country residence on Friday, followed by tea with Queen Elizabeth II at Windsor Castle.

Ahead of the talks, Trump said his relationship with May is “very, very strong”, adding the two will discuss trade and military issues during their meeting on Friday.

Trump is also expected to spend a private weekend in Scotland with his wife, where he owns two golf resorts. 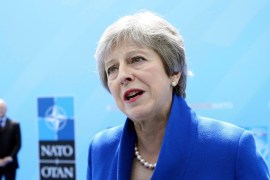 The document calls for close economic ties with the EU through a free trade area and a ‘common rulebook’ for goods. 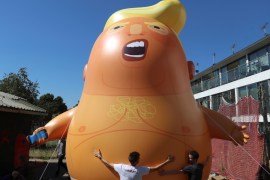 Donald Trump arrives in London amid protests and Brexit chaos

Donald Trump landed in London for a four-day visit to the UK where PM Theresa May will host trade talks. 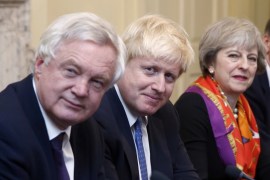 What does the recent political turmoil in the UK mean for the future of Theresa May’s government and for Brexit itself? 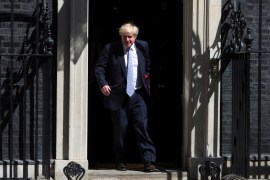