Air attacks believed to have been carried out by Russia on a village in Syria‘s rebel-held Idlib province killed at least 44 people overnight, inflicting the highest death toll in a single attack on the region this year, a monitoring group said on Friday.

“Warplanes, which are likely Russian, targeted the village of Zardana in northern rural Idlib overnight and caused the highest death toll in a single attack on the region including 11 women and six children,” Rami Abdulrahman, the director of the group, said.

Russia’s defence ministry, however, denied that it carried out the deadly air strikes, according to Russian news agencies.

More than 60 people were also injured in the attacks that took place in the village of Zardana, said the Britain-based watchdog adding that the attack occurred after Muslims broke their Ramadan fast after sunset.

The death toll is expected to increase as some of those injured in the attacks were in a critical condition, Abdulrahman said.

The White Helmets rescue group said the air raids had targeted a market near a mosque in Zardana, according to the Reuters news agency.

Rescue workers were still searching under the rubble for survivors.

Such air attacks have been relatively uncommon in recent months in the rebel-held province, which is part of a de-escalation zone agreed on last year by Russia, Turkey and Iran.

In recent years, tens of thousands of fighters and civilians have taken refuge in Idlib after fleeing from other parts of the country under evacuation deals with the government of President Bashar al-Assad. 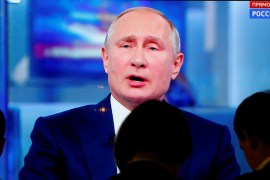 Putin: Russia military ‘will stay’ in Syria – but not long-term

In a televised call-in show, Russian president calls Syrian war ‘a unique tool by which to improve our armed forces’. 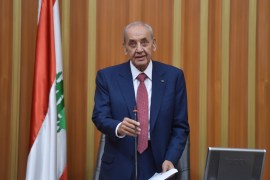 Hezbollah and Iran ‘to stay in Syria until it is liberated’

Lebanese parliament speaker says Hezbollah and Iran will not quit Syria until its ‘territorial integrity’ is regained.

Dow, S&P 500 close at records as earnings season kicks off