Valletta, Malta – As Europe’s leaders forged a new common policy on rescuing refugees at sea, one small ship came to embody the battle for the soul of the continent.

The MV Lifeline soared to notoriety this week after it refused to hand over 233 refugees and migrants it rescued to Libyan authorities.

“After a while, a Libyan coastguard boat approached us and told us to hand [over] the migrants to them,” Lifeline cofounder Axel Steier told Al Jazeera.

“They wanted to bring back the migrants to Libya where they would be put [in] jail. So we said … there is no way for us to hand [over] the migrants,” he said.

The Lifeline was operating under the coordination of the Italian coastguard, which effectively seconded the Libyan coastguard’s request.

“The Italians … provided us with case numbers, but actually, they handed over these cases to the Libyans and said to us, ‘the Libyans take responsibility for this rescue’,” Steier said.

“We think that Italians are breaking international law, because Libya is not safe and the people are crowded in such prisons, they face malnutrition there; torture and rape, for sure, so we are sure this is not a solution and should stop very soon.”

The Lifeline spent six days at sea, unable to find a European port that would accept its refugees, reflecting how attitudes in Europe have hardened since the anti-immigration government of Giuseppe Conte took power in Italy.

It was, however, allowed to dock in Malta on Wednesday. The ship is now the subject of an investigation.

France had earlier agreed to take in some of the refugees and migrants on board the ship, but French President Emmanuel Macron accused the rescue boat of “playing into the hands of smugglers by reducing the risks of the journey”.

Veronique Fayet, head of the French NGO Secours Catholique, said the leaders’ words “are very violent for charities like ours, who are very active with migrants, and who do not see any similarity between ourselves and people smuggling”.

The idea of offshoring migrant camps, and the humanitarian responsibility that goes with rescue, now seems to be at the heart of Europe’s thinking.

Last year, Italy agreed to provide Libya with coastguard vessels, in return for the Libyan authorities holding back refugees who try to cross to Europe. Amnesty International estimates that Libya prevented 20,000 from crossing last year, reducing flows by 78 percent.

It’s not just that Italy has been eager to uphold its arrangement as a blueprint. Countries like Austria, Hungary, Poland, the Czech Republic, Denmark and Slovakia are inclined to support it.

Those same states have refused to participate in a redistribution of asylum applicants crowding the EU’s external border states, Greece, Italy, France, Malta and Spain.

That redistribution was a central plank of the Common European Asylum Policy, which now appears to be unravelling.

Growing support for resettlement outside the EU

The idea is catching on with the European Commission (EC). An EC draft document leaked days before the summit said: “We will support and organise more protection and reception capacity outside the EU as well as resettlement (on a voluntary basis) while fully respecting legal guarantees in the field of asylum.”

The document also said political leverage would be used to persuade countries that produce migrants to keep them at home.

“We will broaden the negotiation framework with countries of origin, using legal migration pathways (vocational training, studies, work) and visa policy as leverage. We will apply adequate conditionality in our bilateral relations with them.”

Early on Friday, EU leaders reached a vaguely worded deal aimed at controlling the number of migrants and refugees going to Europe. Under the deal, “controlled centres” will be set up in member states on a voluntary basis for “rapid and secure” process to distinguish between those eligible for asylum. The leaders also agreed to increase funding for Turkey and freed up 500 million euros ($581m) in funding for North Africa.

Lifeline’s Steier, who spoke to Al Jazeera before the deal was struck, described the terror felt by the ship’s passengers at the prospect of returning to Libya.

Many had crossed the desert from Sudan at great expense, discomfort and danger.

Steier also thinks some members of Libya’s coastguard are involved in smuggling operations.

“In Libya, you have to pay for a ride on these [refugee] boats, it costs about $600. If you get caught by the coastguard, maybe they bring you back to an official disembarkation point, or you get sold to the smugglers, and after you are owned by your smuggler, you face torture.

“They send torture videos to the family to get another time $600 and then, they send out again. This is the money game with the people in Libya, which also involves the Libyan coastguard.”

Earlier this month, the UN imposed sanctions on six individuals, including Abd Al Rahman al-Milad, the head of a regional coastguard unit in Libya, for allegedly leading smuggling and trafficking networks in the country.

Milad has denied the accusations, according to the Reuters news agency.

A case has been filed against Italy at the European Court of Human Rights for sending migrants and refugees back to camps where torture and ill-treatment may occur, violating a principle known as “refoulment” under the Geneva Convention. Should the court uphold the plaintiff, Italy’s policy would have to change.

The Italian coastguard did not respond to Al Jazeera’s requests for comment.

Steier says Lifeline is in possession of such a video from one of the people it rescued, and will release it in the coming fortnight. 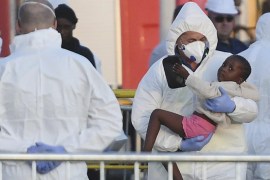 The stranded rescue ship with over 200 people docks in Malta as EU leaders set to meet to discuss the refugee crisis. 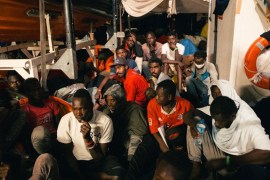 Over 230 people stranded on Maltese waters after neither Italy nor Malta give permission to disembark passengers. 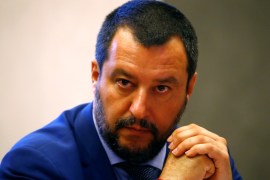 Malta says not responsible for Lifeline boat denied by Italy