Large swaths of Saddleworth Moor in the UK continue to burn as hot and dry weather set up ideal conditions for wildfires.

The moor, which is located in the northern part of the Peak District National Park, has been alight since Sunday. It is known to have destroyed more than 800 hectares of moorland and nearby settlements have been threatened by the smoke and flames.

The residents of 34 homes in the village of Carrbrook were forced to leave their homes on Tuesday as winds drove flames close to the village.

Farmers have driven their sheep to lower ground and wildlife, including deer, has been seen fleeing the affected area.

The UK has had a dry and unusually warm late spring and early summer, and with fine weather expected to continue in the coming days, there is no help from the weather elements in sight.

Instead, 100 soldiers from the Royal Regiment of Scotland have been drafted in to help the local firefighters. An RAK Chinook helicopter has also arrived in the area. This is expected to be used to lift heavy equipment, such as high-volume water pumps, into remote areas.

Smoke from the burning peat has spread across much the region and is threatening Manchester. Peat fires have a very high carbon content and can smoulder for weeks or even months. They are also able to burn underground before re-emerging elsewhere many days later. 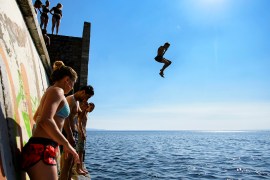