South Sudanese President Salva Kiir and his archrival Riek Machar have agreed to meet in Sudan’s capital for their second round of talks in nearly two years, the Sudanese foreign ministry said, even as expectations for a possible agreement are quite low.

The talks on Monday in Khartoum will follow meetings between the two leaders in the Ethiopian capital, Addis Ababa, on Wednesday and Thursday, as both sides face an end-of-June deadline to avert United Nations sanctions over a civil war that has killed tens of thousands and displaced millions.

But speaking on Friday, South Sudan’s Information Minister Michael Makuei said that the president “is not ready in any way” to work again with Machar.

“Machar cannot be part of government. We have had enough of him.”

Kiir wanted to bring peace to the East African nation but did not believe this was possible through the formation of a transitional unity government with Machar, Makuei added.

“Riek Machar must wait for elections” if he wants to hold an official government position in South Sudan, Makuei said.

For its part, Machar’s rebel Sudan People’s Liberation Movement-in-Opposition (SPLM-IO) described a possible agreement as “unrealistic” and accused the government of planning a fresh offensive even before the talks opened.

South Sudan descended into civil war in December 2013 after Kiir fell out with his then deputy, Machar, dashing the optimism that accompanied independence two years earlier.

Since a 2015 peace deal collapsed in July 2016, with Machar fleeing to South Africa, Kiir’s government has gained the upper hand militarily as the opposition has splintered into a myriad of factions.

Initially largely fought out between South Sudan’s two largest ethnic groups – Kiir’s Dinka and Machar’s Nuer – smaller groups have since spawned their own militias raising question marks about the ability of either leader to halt the war.

Multiple ceasefires and peace efforts have so far been unfruitful.

South Sudan’s East African neighbours have warned that if their latest peace push is as abortive as previous ones, they will have little choice but to back sanctions.

A preparatory team from the Intergovernmental Authority on Development (IGAD), the East African bloc under whose auspices the talks are being held, is expected to arrive in the Sudanese capital over the weekend for Monday’s talks.

It will be the first time Kiir and Machar have met in Khartoum since the outbreak of fighting in 2013.

What was discussed in this week’s meetings in Addis Ababa has been kept under wraps, but Kenyan President Uhuru Kenyatta issued a downbeat statement after the opening of the talks.

“Over time our efforts have been eclipsed by the use of violence, giving credence to the call for punitive measures against perpetrators,” Kenyatta said.

Alor has been in Ethiopia since February when he had traveled to Addis Ababa for a round of talks.

“He refused to go back to [the capital] Juba.” 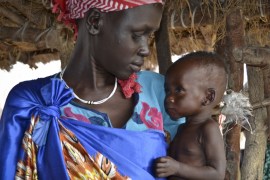 The depths of despair in South Sudan

UN humanitarian official appeals for end to violence against aid workers as fighting between political rivals shows no sign of ending. 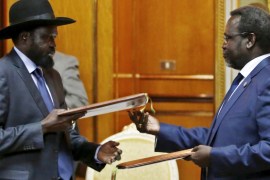 Two South Sudanese leaders will meet on Wednesday for the first time since a peace deal broke down in 2016. 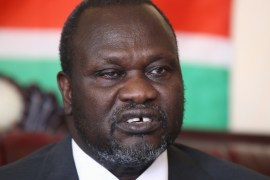 Group says current model for the peace process is ‘unrealistic’ and’there is no shortcut to peace.’