More than 11,000 residents from the southern Philippine province of Lanao del Sur have been forced to flee their homes following fresh fighting between the military and the ISIL-linked Maute armed group.

The provincial disaster agency was quoted on Wednesday as saying that 2,234 families have been affected in seven towns south of the city of Marawi, which was occupied by Maute and Abu Sayyaf fighters for five months in 2017.

At least five fighters have been killed since the latest violence erupted on Sunday, when government troops launched an operation in an area believed to be the sanctuary of the group’s new leader, Abu Dar.

Abu Dar and dozens of Maute fighters, believed to be involved in the Marawi siege last year, had escaped from the city to establish a new camp in the neighbouring town of Tubaran.

That camp has reportedly been captured by government forces, according to a military statement on Wednesday.

Abu Dar is believed to be a former lieutenant of the Abu Sayyaf top commander Isnilon Hapilon, who was reported killed in October 2017 in Marawi.

The group formed an alliance with the Abu Sayyaf and both pledged allegiance to ISIL, as the international group started to expand in Iraq and Syria in 2015. Both Maute brothers were reported killed in 2017 during the siege of Marawi.

Abu Dar’s presence in the hinterlands of Tubaran, where he has many relatives, was confirmed last month when his men reportedly killed a village leader who resisted their plan to venture into town.

When he escaped Marawi, Abu Dar reportedly brought more than $577,000 in looted cash, which government officials said he could use for recruitment and rebuilding of the battered organisation.

The Marawi siege, which began on May 23 last year, killed more than 1,100 people, mostly armed fighters, and displaced an estimated 600,000 residents in the city and neighbouring towns.

Since the fighting ended in October 2017, an estimated 70 percent of the displaced Marawi residents are back in the city, although much of the university town remains in ruin.

The fighting prompted President Rodrigo Duterte to declare martial law in the entire island of Mindanao until the end of 2018. 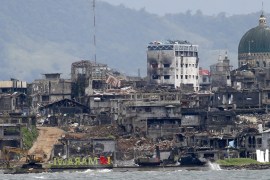 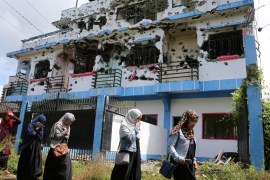 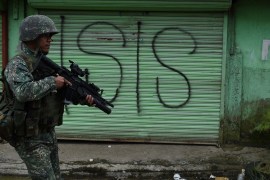 What happened in Marawi?

Why was the city in the southern Philippines captured by ISIL fighters and how did the military take back Marawi?