Tens of thousands of residents have fled the fighting along Yemen’s western coastline where pro-government fighters backed by a Saudi-led coalition are engaged in fierce battles with Iran-aligned Houthi rebels.

Stephane Dujarric, the spokesperson for UN Secretary-General Antonio Guterres, told reporters on Monday that about 5,200 families, or around 26,000 people, have sought safety within their own districts or in other parts of Hudaida governorate.

“The number is expected to increase as hostilities continue,” he said.

“I emphasise my grave worry regarding the Saudi and Emirati-led coalition’s ongoing attacks in Hudaida – which could result in enormous civilian casualties and have a disastrous impact on life-saving humanitarian aid to millions of people which comes through the port,” al-Hussein said on Monday.

He was speaking at the opening session of the UN Human Rights Council in Geneva, where he gave an overview of the overall human rights situation while denouncing the threat of growing “chauvinistic nationalism” around the world.

On Monday, Saudi and UAE Apache attack helicopters pounded Houthi positions as civilians fled in search of shelter from the biggest battle of the war in three years.

The attack reportedly targeted Houthi snipers and fighters positioned on the rooftops of schools and homes in the Manzar neighbourhood near Hudaida’s airport compound, residents said, in fighting that has wounded dozens of civilians and prevented aid organisations from reaching parts of the city.

While most of the intense fighting is in Hudaida, Houthi media reported over 40 air strikes in other parts of Yemen over the past 24 hours.

Losing Hudaida would seriously weaken the Houthis by severing supply lines from the Red Sea to their stronghold in the capital Sanaa, and depriving an estimated 70 percent of the population access to food and medicine.

It could also give an edge to the Western-backed Saudi and UAE-led coalition that, despite superior weaponry and firepower, has failed to defeat the Houthis in a war that has killed 10,000 people and created the world’s most urgent humanitarian crisis.

The battle for Hudaida, launched six days ago, could drag on, inflicting more suffering on civilians who have already endured air raids, port blockades, hunger and a cholera epidemic.

In a post on social media late on Sunday, Anwar Gargash, the UAE’s minister of state for foreign affairs, said that a coalition victory in Hudaida “will pull the Houthis back to the negotiating table”.

‘No electricity, no water’

Yehia Tanani said he and his family left al-Mandhar three days ago and walked for 3km, hiding behind walls and under trees to avoid air raids, before first finding shelter at a fish farm.

Others stayed to care for family members and cattle.

“They told us that some humanitarian organisations are going to send buses but then they said no buses could come in or out. So we started walking on foot carrying our children, sitting every while for rest while the Apaches hovered above us. We were scared not knowing if we’d be shot or not,” he said.

“Now, we’re in this school, no mattresses, no electricity, no water, no bathrooms, nothing. And we have children who need medicine, food, anything, but we don’t have anything,” he said, sitting on the floor of an empty classroom of a school being used to house those displaced by the fighting.

Children slept on the floor of empty classrooms while others sat forlornly in the courtyard, where a few items of clothing and blankets were draped over balconies and upturned desks.

The Saudi-led coalition said it could take Hudaida quickly enough to avoid interrupting aid and that it would focus on capturing the airport and port and avoid street fighting.

In an interview with Al Jazeera, Mohammed al-Bekheti, a Houthi spokesman, denied reports that the UN special envoy to Yemen had asked the Houthis to hand over their weapons in return for Saudis stopping their attacks.

“[They] are lying to people by claiming that the UN envoy is carrying such demands. This is because they are trying to justify their military defeats and failures,” he said.

The coalition intervened in Yemen in 2015 to restore the internationally recognised government driven into exile by the Houthis, and thwart what Riyadh and Abu Dhabi see as efforts by regional adversary Iran to dominate the region.

The Houthis rule the most populous areas of chronically unstable Yemen, a poor nation of about 30 million people. 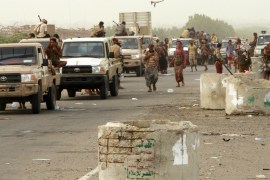 Can diplomacy win in the fight for Yemen’s Hudaida?

The biggest battle of the three-year Yemen war raises fears of a humanitarian catastrophe. 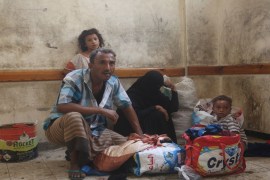 In Yemen’s Hudaida, ‘the sound of warplanes never ceases’ 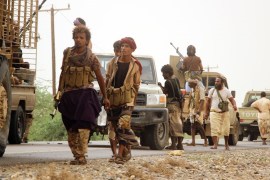 Air strikes hit international airport near the port of Hudaida, a major gateway for aid to the famine-stricken country.