Here are all the latest developments:

Al Jazeera’s James Bays on the significance of the deal

US military forces have not received directions to stop joint drills

Russia: ‘Devil in the detail’

“President Donald J. Trump of the United States of America and Chairman Kim Jong Un of the State Affairs Commission of the Democratic People’s Republic of Korea (DPRK) held a first, historic summit in Singapore on June 12, 2018.

President Trump and Chairman Kim Jong Un conducted a comprehensive, in-depth, and sincere exchange of opinions on the issues related to the establishment of new U.S.–DPRK relations and the building of a lasting and robust peace regime on the Korean Peninsula. President Trump committed to provide security guarantees to the DPRK, and Chairman Kim Jong Un reaffirmed his firm and unwavering commitment to complete denuclearization of the Korean Peninsula.

Convinced that the establishment of new U.S.–DPRK relations will contribute to the peace and prosperity of the Korean Peninsula and of the world, and recognizing that mutual confidence building can promote the denuclearization of the Korean Peninsula, President Trump and Chairman Kim Jong Un state the following:

Having acknowledged that the U.S.–DPRK summit—the first in history—was an epochal event of great significance in overcoming decades of tensions and hostilities between the two countries and for the opening up of a new future, President Trump and Chairman Kim Jong Un commit to implement the stipulations in this joint statement fully and expeditiously. The United States and the DPRK commit to hold follow-on negotiations, led by the U.S. Secretary of State, Mike Pompeo, and a relevant high-level DPRK official, at the earliest possible date, to implement the outcomes of the U.S.–DPRK summit.

President Donald J. Trump of the United States of America and Chairman Kim Jong Un of the State Affairs Commission of the Democratic People’s Republic of Korea have committed to cooperate for the development of new U.S.–DPRK relations and for the promotion of peace, prosperity, and security of the Korean Peninsula and of the world.

DONALD J. TRUMP
President of the United States of America

God, this is just depressing. All that hype for this? All that drama and the Nobel talk? Come, art of the deal. This is it? This is, well, pathetic given that the US president was personally involved. https://t.co/1TKaCFXplP

ZOOM IN ON THE TEXT: "President Trump committed to provide security guarantees to the DPRK, and Chairman Kim Jong Un reaffirmed his firm and unwavering commitment to complete denuclearization of the Korean Peninsula." pic.twitter.com/vXBeIMP81i

Pompeo: joint statement ‘the start of a new relationship’

A little bit of jostling going on in the signing ceremony room. pic.twitter.com/uBjISU5tzN

Trump: meeting with Kim ‘better than anybody could have expected’

Dennis Rodman: I got a call saying Trump was proud of me

Trump and Kim meet after months of threats and insults

South Korea's president and prime minister together watched a live stream of the summit opening. You can see their reaction on their faces #TrumpKimSummit pic.twitter.com/GPwa0gy3SB

Trump on way to meet Kim

Meetings between staffs and representatives are going well and quickly….but in the end, that doesn’t matter. We will all know soon whether or not a real deal, unlike those of the past, can happen!

A few minutes after his early Tuesday post, Trump used Twitter again to take aim at his critics:

The fact that I am having a meeting is a major loss for the U.S., say the haters & losers. We have our hostages, testing, research and all missle launches have stoped, and these pundits, who have called me wrong from the beginning, have nothing else they can say! We will be fine!

Denuclearization isn’t something that ends badly for the North Koreans. In fact, it’s just the opposite — it leads to a brighter, better future for #DPRK. #SingaporeSummit pic.twitter.com/22E13NoeL7

The fact that our 2 leaders are sitting down face to face is a sign of the enormous potential to accomplish something that will immensely benefit both of our peoples & the entire world. #singaporesummit pic.twitter.com/7a6o6jnKAu

Analyst: N Korea looking for ‘fundamental change’ in US policy

Trump to leave Singapore on Tuesday

In photos: Day before Kim-Trump summit

Denuclearisation process must be ‘anchored in international law’, ICAN

Pompeo: Complete denuclearisation of the Korean Peninsula only acceptable outcome

‘Peace deal bottom line for the US’: analyst

Trump and Kim arrive in Singapore 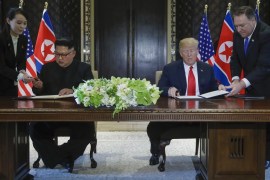 Short on detail, the landmark statement includes a commitment by Kim to ‘work towards complete denuclearisation’. 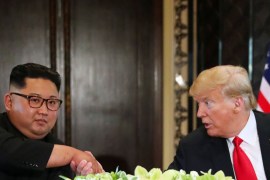 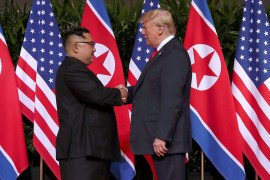