Last week’s eruption of the Fuego volcano left at least 110 people dead and 197 others missing.

Garcia’s village – the closest to the volcano – was buried by an avalanche of hot ash and volcanic matter that destroyed at least 187 homes.

“Be careful with the little girl,” a young female rescue worker tells her colleagues.

“You need to dig around her,” she adds, her voice muffled by a white mask.

Around 20 rescue workers are searching for the young girl’s body parts in another small house in the village that was completely buried by the ash. Only the roof is visible.

Rescue workers stand in a line, passing along buckets of dark brown earth that is still hot and gives off steam.

Human remains are brought out in plastic bowls covered with blankets.

Since the main road to San Miguel Los Lotes has been cordoned off by police and only rescue workers and a few journalists are allowed to enter due to the imminent danger of another eruption, a number of survivors, desperate to retrieve the bodies of their loved ones, have risked their lives to enter the village through winding paths in the wilderness.

The remains that are recovered are taken to a teacher training academy in the city of Escuintla, that has been turned into a provisional morgue.

When two police pick-up trucks arrive, carrying the body parts retrieved today from San Miguel Los Lotes, desperate relatives flock to the vehicles, hoping to catch a glimpse of their loved ones.

But bereaved family members such as Garcia, are forced to undergo a bureaucratic nightmare before they can claim the remains and proceed with funeral arrangements.

‘They just keep telling me to wait’

First, they are interviewed by staff from the National Institute of Forensic Science (INACIF) and asked to provide as many details as possible on the missing person, including his or her age, sex, clothing, and distinctive features such as fractures or tattoos.

Then, fingerprints are taken and compared with those in the INACIF database. If a match can’t be found, a DNA sample is taken and entered into the database to find a match. If the relative isn’t a next-of-kin, it takes longer to find a match. Once a match is finally found, relatives are asked to identify the remains.

Garcia arrives at the morgue, still wearing a mask, and accompanied by her nephew, Herbert Hernandez, 38.

They are interviewed by the staff.

Garcia, who had a fruit stall in a local market, has already buried two family members, including her brother, Pedro Chinchilla.

Two others, including her mother, Petrona, have been brought to the morgue but are still being identified. Forty-seven others are still missing.

“I feel awful, knowing that my family is still buried there. I need to find even a few bones so that I can give them a Christian funeral,” Garcia tells Al Jazeera.

The complexity of the bureaucracy is taking a heavy toll on the survivors of the Fuego volcano eruption.

“Last Monday, I was told that the remains of my brother, Eesar Gudiel, would be given to me,” Hernandez tells Al Jazeera.

“He was found with his ID card and I recognised the photo I was shown, but then they told me that he wasn’t on the list,” he says.

“They just keep telling me to wait.”

‘My heart bursts with anguish’

Garcia’s mother and other victims died when they were hit by pyroclastic flows: deadly clouds of ash, lava and boiling gas at temperatures between 200C and 700C that move at an average speed of 80 kilometres per hour.

The temperature of the air in San Miguel Los Lotes last Sunday would have been so high that it would have severely damaged the linings of their lungs as they breathed in, and once they were struck by the deadly cloud, clothes would have burned away and any metal, such as jewellery or watches would have seared itself into their skin.

Identifying corpses or body parts that are so badly charred has been extremely traumatic for family members.

Eva Ascon, 38, was so distressed after identifying six nephews and nieces, aged one to 10, that she had to be sedated.

“My heart is bursting with anguish and sadness”, she says. Her ordeal is far from over as she is still searching for 20 family members.

Ascon last saw the children a month ago, during a family meal.

“We were a very close-knit family”, she says. 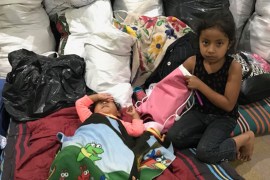 Psychologists warn children are the most at risk of PTSD, as survivors of the deadly eruption cope with the trauma. 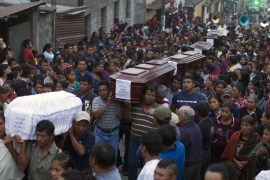 Fuego volcano disaster: ‘My daughter must have been swept away’

Survivors of Guatemala’s Fuego volcano eruption hold onto the slim hope of finding their loved ones alive. 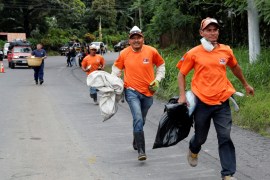 Dangerous flows of lava prompt a new round of evacuations of rescue workers and nearby villages.