Tropical Cyclone Mekunu is threatening Oman‘s southern coast near Salalah, as well as the eastern portion of neighbouring Yemen.

Mekunu development has occurred barely a week after another cyclone, Sagar, formed in the same region. Sagar became one of very few cyclones to pass right through the Gulf of Aden, and it was the strongest such cyclone to hit Somalia, leaving around 30 people dead and causing devastation to crops and livestock.

Mekunu is expected to take a very different track. It has already made a glancing blow across the Yemeni island of Socotra.

Since then, Mekunu has intensified even further as it moves northwards. At 12GMT on Thursday sustained winds were expected to be around 165km per hour, the equivalent of a Category 2 hurricane on the five-point Saffir-Simpson scale. Wave heights of more than seven metres were predicted at that time.

With sea surface temperatures in that region of the Arabian Sea between 31 and 32C, and low wind shear (a change of wind speed and direction with height) there is every chance that Mekunu will gather even more energy.

It could possibly become a Category 3 system before it makes landfall. This is forecast to be late on Friday afternoon or during the evening.

The sequence of events that occurs at the point of landfall is likely to be very quick and equally as dramatic.

Mekunu will inevitably engage some of the hot, dry, dusty air over the Arabian Peninsula which will all act to weaken it. Waters along the Omani coast are far too cool to sustain a cyclone, so that will also act against it. But all this may be too little, too late.

Current forecasts suggest Mekunu will hit the coast with sustained winds of 140km/h, strong enough to cause extensive damage. The coastal strip will also have to face huge seas and a possible storm surge.

As Mekunu hits the shore and the mountains further inland, it will disintegrate rapidly, but not before it drops huge amounts of rain. It is the rain, and the flash flooding that this will generate which is, far and away, the main concern.

Salalah’s annual rainfall is 96mm. Forecast rainfall totals for Mekunu are between 100 and 200mm, all falling in probably less than 12 hours. Much of that water will run off the mountains, through ravines and cause severe flooding.

Ahead of the storm, Omani media reported lines at gas stations in Salalah, the hometown of Oman’s longtime ruler, Sultan Qaboos bin Said. The police urged citizens to seek safety and warned that floods were likely in valleys. It also said it planned to deploy more ambulances and police officers to areas likely to be affected by the cyclone.

Also, the health ministry said it evacuated critically ill patients at locations of the Sultan Qaboos Hospital in Salalah, flying them by air north to Muscat, the country’s capital. State television aired images of others being evacuated from remote villages in the path of the cyclone.

The port of Salalah, crucial to Qatar amid a boycott by four Arab nations over a diplomatic spat with Doha, said it also had taken precautions and secured cranes ahead of the cyclone. 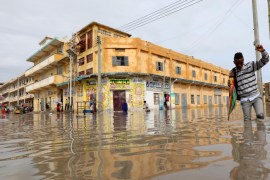 Tens of thousands of people are affected by flooding as details of the destruction slowly emerge. 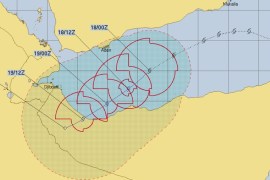