A British-Iranian woman imprisoned in Iran has appeared in court to face a new charge of “spreading propaganda” against the government, according to her husband.

In a statement sent to Al Jazeera on Monday, Richard Ratcliffe said his wife, Nazanin Zaghari-Ratcliffe, denied the latest charge after being summoned to a court in the capital, Tehran, on Saturday.

Zaghari-Ratcliffe, a charity worker with the Thompson Reuters Foundation, is already serving a five-year jail term in Tehran’s Evin Prison, after being convicted in 2016 for allegedly plotting to overthrow the Iranian government – allegations that she had vehemently denied.

To Zaghari-Ratcliffe and her family, the new case is seen as a ploy to delay her release on parole, which has already been reportedly approved by the head of the prison.

According to a press statement issued by the Free Nazanin campaign group, she appeared in court without her lawyer present.

She was reportedly ordered to find a new lawyer within 10 days after the judge barred the existing one from entering the courtroom as he was not allowed to represent her on “security cases”.

During her court appearance, she was shown a file containing photos and press coverage of her detention, among other documents.

“While she was not allowed to read it in detail, from that quick view she understood she was being prosecuted again with the same material that had been exaggerated and used to justify her first trial,” the statement read.

At the courtroom, Zaghari-Ratcliffe told the judge, identified as Abolghassem Salavati, that she had “never been involved in overthrowing the regime”.

“I do think the government here needs to reform, but I have never been involved in any attempts to change the regime. I have my red lines with some of the political groups who want to be an alternative. I do not want to overthrow the regime,” the statement quoted her as saying.

Zaghari-Ratcliffe had relayed the details of her appearance in court to her family and the new British Ambassador to Iran Robert Macaire, whom she met for 20 minutes on Sunday.

It was the first time she was allowed to contact the embassy in more than two years.

During her conversation with Macaire, she pleaded that he and the UK Foreign Secretary Boris Johnson visit her in prison.

She also asked that the UK government file a formal diplomatic note protesting against the new charge against her, the Free Nazanin Campaign statement said.

The case presents another challenge for the British government, which has a long but complicated relationship with the Iranian government.

At Saturday’s hearing, Zaghari-Ratcliffe appealed to the judge that she be granted temporary freedom to spend time with her daughter, who is turning four in June.

“There is something called clemency. Give me that for the sake of my baby,” Zaghari-Ratcliffe told the judge, according to the campaign group’s statement.

The judge reportedly responded: “Given your words, I will do my best to address your case quickly. We will attend to it on a priority basis, and I will talk to the prosecutor”. 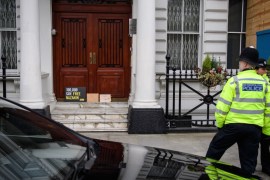 Husband of Briton jailed in Iran for spying wants talks

Jailed charity worker’s spouse pushes for meeting with an Iranian diplomat who is in London for a visit. 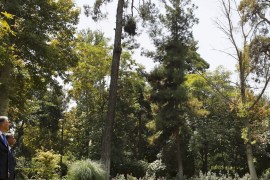