A small but powerful tropical cyclone is threatening Djibouti and northern parts of Somalia with severe weather within the next 24 hours.

‘Sagar’ was named by the Indian Meteorological Department on Thursday, after beginning life as a tropical depression (1A) in the Gulf of Aden.

‘Sagar’ is now in the western part of the Gulf of Aden. Its northern edge has brought heavy rain and some minor flooding to coastal towns of Yemen. Its forecast track, according to the Joint Typhoon Warning Centre, is to the west-southwest, making landfall close to the small town of Lughaya.

It is highly likely that ‘Sagar’ will be one of the first tropical storm systems to cross the entire Gulf of Aden. For such systems to affect Djibouti is almost unheard of. Since the start of satellite imagery in the mid-1960s, only two tropical cyclones have been observed to move into the western Gulf of Aden.

The first was Tropical Storm 1A which made landfall in northern Somalia in May 1984. As recently as November 2015 Cyclone Megh devastated the island of Socotra before passing just to the north of Somalia and making landfall in Yemen.

‘Sagar’ has taken advantage of favourable winds through the vertical profile of the atmosphere, and sea surface temperatures of around 30C, easily warm enough to allow for further intensification.

Although the winds associated with ‘Sagar’ are expected to peak in the next few hours, with sustained winds of 95km per hour, the seas in the Gulf will remain very rough until well after landfall, which is expected to be around 10:00 GMT on Saturday.

The rainfall, and its effects, remain the main concern. Between 50 and 150 mm, up to a year’s worth of rain, is expected to fall on these rugged desert landscapes. Flash flooding directly from rainfall runoff is likely to be followed by significant river flooding.

The UK Met Office issued a special advisory for the region:

“Severe flash flooding and river flooding across the region will lead to a loss of human life, livestock, and the destruction of crops, property and infrastructure.”

They also pointed out that the heavy rain across parts of western Yemen could have an impact on the rates of cholera which is affecting the country.

The effects of ‘Sagar’ could also be made worse by the impact of Ramadan, where people are fasting during the day, and less likely to be prepared for the life-threatening weather. 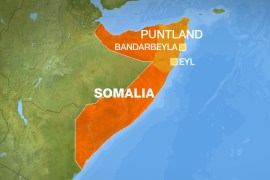 Puntland president says at least 100 people killed and electricity and phones down in the affected towns.