US Secretary of State Mike Pompeo and his South Korean counterpart Kang Kyung-wha held emergency talks on Wednesday following North Korea’s cancellation of ministerial talks with Seoul and threats to pull out of the Trump-Kim summit scheduled to be held in Singapore on June 12.

A US State Department source confirmed to Al Jazeera on Thursday that the call took place between Pompeo and Kang.

“Secretary Pompeo and the Foreign Minister Kang of South Korea had the opportunity to speak last evening by phone, and we continue to coordinate closely,” the statement said without elaborating on the details of the call.

They agreed that the two sides would “continue close cooperation to achieve the complete denuclearisation and the establishment of peace on the Korean Peninsula through the successful hosting of the North Korea-US summit on the basis of the accomplishments in the April 27 South-North summit,” South Korea’s foreign ministry said.

South Korea has also reportedly offered to mediate between the US and North Korea, Al Jazeera’s Rob McBride, reporting from Seoul, said on Thursday.

Al Jazeera’s Adrian Brown, reporting from Beijing, said China had called on the US “to seize the opportunity for peace”.

The news comes as Japan’s Asahi Shimbun reported on Thursday that Pompeo had demanded that North Korea ship overseas some of its nuclear warheads, ballistic missiles and other nuclear materials within six months.

In exchange, the US hinted that it might remove Pyongyang from a list of state sponsors of “terrorism”.

But North Korea’s decision on Wednesday to abruptly cancel ministerial-level talks with South Korea has put the future of the entire negotiations into question.

Pyongyang said its decision was in response to the ‘Max Thunder’ joint military exercises between the US and South Korea, which involves some 100 military aircraft.

Following Pyongyang’s decision, US President Donald Trump said “we will have to see” if his planned summit with North Korean leader Kim Jong-un will go ahead.

On Wednesday, North Korea’s first vice minister of foreign affairs, Kim Kye-gwan, said: “If the US is trying to drive us into a corner to force our unilateral nuclear abandonment, we will no longer be interested in such dialogue and cannot but reconsider our proceeding to the … summit.”

North Korea defends its nuclear and missile programmes as a necessary deterrent against perceived aggression by the US, which keeps 28,500 troops in South Korea.

It has long said it is open to eventually giving up its nuclear arsenal if the US withdraws its troops from South Korea and ends its “nuclear umbrella” security alliance with Seoul.

Kim Kye-gwan also derided as “absurd” comments by Trump’s top security adviser, John Bolton, who suggested discussions with North Korea should be similar to those that led to components of Libya’s nuclear programme being shipped to the US in 2004.

North Korea clashed with Bolton when he worked under the administration of former President George W Bush.

“We shed light on the quality of Bolton already in the past, and we do not hide our feeling of repugnance towards him,” he said. 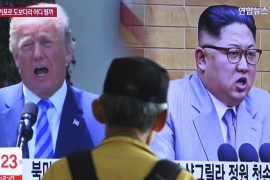 US State Department says it’s moving ahead with planned Trump-Kim meeting in Singapore in June despite North’s warning. 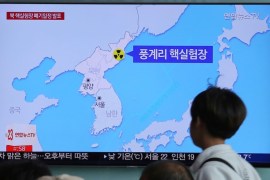 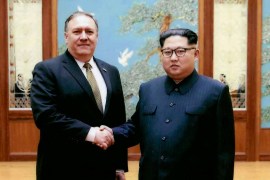 US secretary of state secures release of US detainees after meetings with North Korean officials in Pyongyang.