A US Senate committee looks likely to approve the confirmation of President Donald Trump’s pick Gina Haspel to head the CIA, despite vigorous opposition over her role in setting up alleged “black sites” used to detain and torture individuals accused of being “terrorists”.

Senator Mark Warner, the senior Democrat in the Senate intelligence committee, announced late on Tuesday that he is supporting the confirmation of Haspel, paving the way for at least two other opposition Senate members to rally behind Trump’s nominee on Wednesday.

Warner said he received assurances from Haspel on her views on the CIA’s enhanced interrogation programme, which human rights advocates have classified as torture.

He said that Haspel’s nomination has “strong support” even among intelligence community leaders who served under former President Barack Obama.

If confirmed by the full Senate next week, Haspel would become the first woman to head the Central Intelligence Agency (CIA).

She has been serving the spy agency for about 33 years.

On Monday, Haspel wrote a letter to Warner admitting that the controversial CIA interrogation technique “ultimately did damage to our officers and our standing in the world”.

“With the benefit of hindsight and my experience as a senior Agency leader, the ehanced interrogation programme is not one the CIA should have undertaken,” she said.

Still, she said she “won’t condemn” those who made the “hard calls”, which she said produced “valuable intelligence” following the September 11, 2001 attacks in the US.

A US Senate report, however, concluded in 2014 that torture was “ineffective” and produced bad information.

For days, Haspel’s confirmation was in peril after several senators said they would oppose her confirmation citing her role in the operation of a “black site” prison in Thailand and the drafting of orders to destroy evidence detailing the torture.

Torture is illegal under the Geneva Convention.

During his election campaign, Trump vowed to resume waterboarding, a form of simulated drowning previously used by CIA interrogators but now banned, and promised techniques “a hell of a lot worse”.

During her confirmation hearing, Haspel also repeatedly refused to answer questions whether or not the reported torture was considered “immoral”.

Among those who opposed Haspel’s confirmation is the ailing John McCain, who is a senior member of the ruling Republicans and the party’s presidential nominee in 2008.

The 100-seat US Senate is narrowly divided, with the Republicans holding 51 seats and the Democrats, 47, with two independent members voting with the minority. The split makes it crucial for Haspel to get support from the opposition to cross the 51-vote threshold for confirmation.

Meanwhile, the Physicians for Human Rights said it remains opposed to Haspel’s confirmation, saying her assurances are “inadequate to address grave concerns” they raised earlier.

“In refusing to denounce torture, Haspel is effectively signalling she does not recognise the constraints of the law, which prohibits waterboarding and other forms of cruelty,” Sarah Dougherty, senior fellow of the group, said in a statement.

“CIA torture was designed to break human beings. Nothing speaks louder than Haspel’s secrecy and silence on torture, destruction of evidence, and her role in both.”

In an interview with Al Jazeera, Gerald Staberock, secretary-general of the World Organization Against Torture (OMCT), said Haspel’s expected confirmation is a “terrible message by the US that torture is not a crime”.

“Usually it should bring you to prison, but not into heading the country’s key intelligence office,” Staberock said. ‘”It’s a message to everybody in the CIA and the security apparatus that you can make a career while you torture people.”

Staberock also said that when Haspel goes around the world, she will have “zero authority” to speak against abuse and torture in other countries.

“Torture is unacceptable, immoral and illegal. It is a boundary that you cannot cross. If you cross it here, you cross it everywhere.”

Kamala Harris, the US Senator from California who vigorously questioned Haspel, has led Democrats in opposing Haspel’s confirmation.

In an interview with CNN, Harris said picking Haspel sends the wrong signal “about our values as a country, in terms of how we value the rule of law, how we value transparency, how we value our moral authority”. 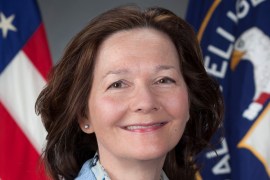 On torture, war crimes and Trump’s pick for CIA director 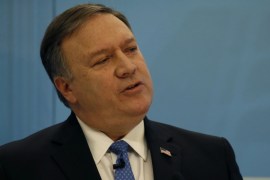