At least 33 people have been killed and 19 others wounded in several poll-related incidents ahead of Monday’s nationwide local elections in the Philippines, the country’s police chief said.

Police chief Oscar Albayalde said on Monday that 18 incumbent local officials, four candidates, three former elected officials and eight civilians were among the dead since the campaign season kicked off on April 14.

Nearly 60 million Filipino voters were eligible to cast their ballots on Monday to elect officials of 42,000 villages, also known as barangays, across the country.

But, according to local reports, prominent voter President Rodrigo Duterte failed to cast his ballot in the first elections since he became president in 2016.

Duterte’s aides did not explain why he did not vote.

Despite a gun ban during the campaign season, at least 36 suspected and seven validated election-related incidents were recorded as of Sunday, Albayalde said.

Among those incidents were an ambush targeting a town mayor and his family in central Cebu province on Sunday, and the killing of a former member of Congress in the northern province of La Union.

On Sunday morning, Cebu mayor Vicente Loot and his family escaped unharmed after a gun attack, but his two drivers and his grandchild’s nanny were wounded, according to the Cebu provincial police.

On Saturday, former La Union Congress member Eufranio Eriguel was shot dead while he was delivering a campaign speech in support of a candidate for village chief.

Police said the gunmen fled the scene and authorities were conducting operations to arrest them.

According to the Philippine Daily Inquirer, a local radio broadcaster in the southern island of Mindanao was also killed on Saturday.

The Philippines is notorious in Southeast Asia for its deadly political violence.

But the deaths recorded this year were significantly lower compared with the last village elections in 2013 when 109 people were killed, and 59 were injured, police chief Albayalde said.

Village-level elections in the Philippines are crucial in determining who will win in the local and national elections in 2019, as village elders act as grassroots organisers for political parties. Duterte is also seeking support from local leaders to change the constitution.

This year, 684,785 candidates ran for village-level seats, while 386,206 ran for leadership posts in nationwide youth councils. 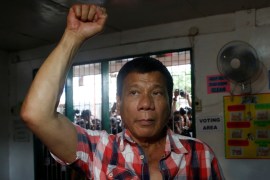 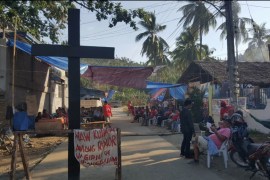 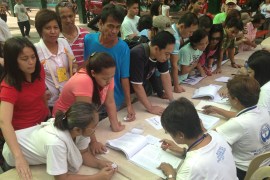 Filipinos head to polls with eyes on 2016