Democratic senators have called for reinstating net neutrality protections and moved to force a vote on the proposal.

A group of senators led by Democratic leader Chuck Schummer and Edward Markey filed a discharge petition on Wednesday, necessary to trigger a vote to overrule the Federal Communications Commission’s decision to revoke protections put in place during the presidency of Barack Obama.

It is not clear when the vote will take place, but advocates believe the Senate will vote before the end of next week.

Proponents currently have the backing of 47 Democrats and two independents, as well as Republican Senator Susan, and they believe they will win on a 50-49 vote.

However, if the Senate manages to repeal the measure, this initiative is not likely to pass the Republican-controlled House of Representatives or to survive a veto by President Donald Trump.

The new FCC rules, once effective, would give internet service providers powers to change how consumers access the internet, but include new transparency requirements that require them to disclose any changes to consumers.

The FCC has not yet disclosed when the new rules take effect, but officials have said the commission is likely to give 30-days notice before the changes take place.

The FCC could soon announce the start date.

“The end of net neutrality would be a disaster four our country and the free flow of ideas. But this fight is not over,” Bernie Sanders wrote.

On Wednesday, May 9th, we officially file the petition to force a vote. If you don’t see your Senators on this list, they need to know how you feel about #NetNeutrality TODAY. My resolution will *fully* restore #NetNeutrality & we only need #OneMoreVote to pass it in the Senate. pic.twitter.com/743YFCPkqU

So what is the debate about, here are the key points:

What is #NetNeutrality and why are we on #RedAlert to protect it today?

I invented the web as an open, permissionless space #foreveryone. The FCC’s repeal of #NetNeutrality threatens to take that away. Tell the Senate they must protect net neutrality to keep the web open: https://t.co/B73BzfwMi0 #RedAlert cc @lisamurkowski @SenJohnKennedy @JeffFlake 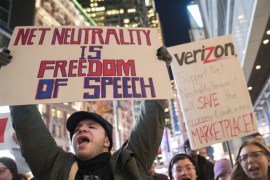 What is net neutrality and why it matters

The FCC votes to end the 2015 Open Internet Order. Here’s a guide to net neutrality and why it matters.