New York City – The news that Martin Luther King Jr had been murdered on a balcony in Memphis, Tennessee hit 17-year-old Freeman Hrabowski like a death in the family.

In 1968, Hrabowski was a math-obsessed undergraduate at Hampton University, in the midst of pledging King’s Alpha Phi Alpha Fraternity.

His fellow students were devastated, especially those, like him, with roots in the Deep South.

“The other kids were sad, but they were trying to understand why we felt almost like this guy was a part of our family,” Hrabowski told Al Jazeera. “It was as gut-wrenching as an experience could be for some of us. The ineluctable question became: is there any more hope?”

Hrabowski knew King better than most.

As a 12-year-old boy, he marched in the Birmingham Children’s Crusade to protest his city’s rigid racial segregation, the hand-me-down textbooks, the endless reminders, big and small, that the all-white authorities who ruled the city did not accord him full humanity.

He remembers King speaking at his family’s church – Hrabowski in the back, eating M&Ms and working on math homework – and telling the congregation that, if the children marched for equal rights, the country could not turn away.

The anniversary of King’s death, 50 years ago on Wednesday, comes as a new generation of young activists tests itself against the entrenched and powerful.

The young black leaders of today

Several prominent leaders of the movement for gun control lent new strength in the aftermath of February’s school shooting in Parkland, Florida, are not yet old enough to vote.

Black Lives Matter chapters draw much of their membership from activists in their teens and twenties.

Among them is 25-year-old Tifanny Burks who is an organiser with Black Lives Matter in Broward County, Florida. Burks said that she sees her work as continuing a tradition set by King and other civil rights leaders.

“The type of organiser I am relies on shared wisdom from people who have done this work in the past,” Burks said. “I take a lot of inspiration from Martin Luther King, but also from freedom fighters who are less well known like Eula Johnson, Ella Baker or Fannie Lou Hamer.”

Burks grew up in South Florida and returned there from New Jersey two years ago, leaving a lacklustre job as a data analyst.

Though she had long felt passionate about social justice, the 2016 police shootings of Alton Sterling, Michael Eugene Wilson Jr and Gregory Frazier spurred her to become a community organiser with Black Lives Matter Alliance Broward.

When some 800 people turned out for the first action she organised, she felt certain she had chosen the right path.

Burks described her time with Black Lives Matter as a crash education in all the United States history omitted from standard high school curricula, including the history of the US labour movement, black feminist thinkers from the 1960s and 1970s, and the role of youth in the civil rights movement.

I take a lot of inspiration from Martin Luther King, but also from people who for one reason or another are less well known like Ella Baker or Fannie Lou Hamer.

Together with other chapter members, she has worked on a number of campaigns. One recent success was an effort to rename several streets in Hollywood, Florida. The streets, which ran through predominantly black communities, had been named after prominent Confederate leaders, including the first grand wizard of the Ku Klux Klan (KKK).

After the Parkland shooting last February, Burks began working with black student survivors who felt invisible in the national debate over gun control that abruptly descended on their high school.

“My school feels more like a prison than a school with the heavy police presence. I have already been racially profiled.”- Kai Koerber, A Black student at Marjory Stoneman Douglas pic.twitter.com/c08UwzmDh4

Some proposals in the wake of the Parkland shooting, such as stationing police in public high schools, are liable to make students of colour feel even less safe, Burks said.

Instead, she suggested examining the complex factors underlying gun violence that might extend to police militarisation and white entitlement. That conversation would be difficult, but essential, Burks said.

“Otherwise, only some people will benefit from this,” she told Al Jazeera.

‘Young people bring out the humanity’

Like civil rights activists half a century before her, Burks sees children and teens as uniquely capable of sparking that conversation. “Somehow, young people bring out the humanity in folks who might otherwise have been indifferent,” she said.

“I am tired of seeing all these lives being taken every single day due to the inaction of our elected officials,” Caldart said.

Caldart sees gun control as an entry point in a larger fight for safer, more equitable communities. She, too, feels that mass shootings monopolise attention that should be paid to daily gun violence, which young black activists have long for.

“Black youth have been fighting for gun reform in their own neighbourhoods for a long time, and it seems to be diminished and it seems to be looked over,” Caldart said. “I want to make sure that people understand that this issue did not just happen.”

“We need to focus on all aspects of gun violence,” she added.

Freeman Hrabowski, who today is president of the University of Maryland, Baltimore County (UMBC), sees continuity between King’s struggle for civil rights and today’s young activists.

“Young people are crying out and taking action because adults have not done enough,” Hrabowski said. “In both cases … young people are saying in a very strong and convincing way: we don’t accept injustice.”

Activists face no shortage of challenges. The semi-centennial of King’s death arrives as many of the signature achievements of the civil rights era, such as the 1965 Voting Rights Act, are weakened or rolled back. A recent report from the Eisenhower Foundation warned of neighbourhood and school re-segregation, emboldened white supremacists, and the erosion of many economic gains, such as home ownership, that black Americans made since the 1960s.

To see kids of all races from around the world - from Baltimore and DC, but also from everywhere else - connecting together and focusing on ideas ... it is exactly what Dr King's dream was.

Still, Hrabowski is adamant that “the more hell you’ve been through, the more you realise there is always hope.”

After the initial shock, King’s assassination did not destroy Hrabowski’s hope for a more just US. Hrabowski carried it into a career in education, building UMBC into an institution that, today, produces more black MD and PhD graduates than any other US school. Hrabowski sees his university, with its diverse and international student body, as the fulfilment of King’s vision.

“I could never have imagined that such a place could ever even exist. People take so much for granted today,” Hrabowski said.

“But to see kids of all races from around the world – from Baltimore and DC, but also from everywhere else – connecting together and focusing on ideas … it is exactly what Dr King’s dream was.” 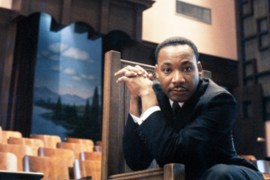 Decades after King’s assassination, the southern US city still faces the racial problems the late civil rights leader fought against. 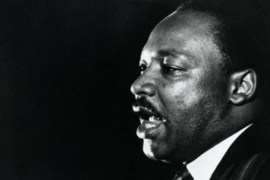 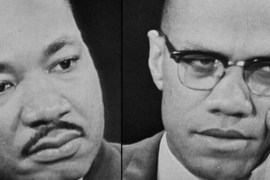