Saudi Arabia’s Crown Prince Mohammed bin Salman has declared that Israel has the right to its own land alongside Palestinians.

In an interview with the US-based The Atlantic magazine, the 32 year old heir to the Saudi throne declared: “I believe that each people, anywhere, has a right to live in their peaceful nation.”

The crown prince said that “there are a lot of interests” his country shares with Israel.

Bin Salman also said that while his country has “religious concerns” about the holy mosque in Jerusalem and the rights of Palestinians, it has no objection “against any other people”.

“I believe the Palestinians and the Israelis have the right to have their own land. But we have to have a peace agreement to assure the stability for everyone and to have normal relations.”

Bin Salman also said Saudi Arabia “does not have a problem” with Jews, saying that Islam’s Prophet Muhammad “married a Jewish woman”.

Saudi Arabia and Israel have no formal diplomatic relationship.

Riyadh has long maintained that a peace agreement with Israel should be based on the 1967 demarcation line established before Palestinian lands were usurped during the Six-Day War.

Recent developments in Riyadh, however, have indicated that ties between the two countries are warming up.

In March, Saudi Arabia granted India’s national carrier permission to use its airspace to operate a direct flight between New Delhi and Tel Aviv.

The move ends a decades-long ban by Saudi Arabia on the use of its airspace for flights to Israel.

US President Donald Trump, under the efforts of his senior adviser and son-in-law, Jared Kushner, is busy devising a new plan to break the deadlock of the peace process, which he has described as “the ultimate deal”.

The White House consider’s Saudi Arabia as crucial in achieving the plan. Kushner is seen as a close ally of bin Salman.

In the Atlantic interview, bin Salman accused Saudi Arabia’s regional rival Iran of being part of a “triangle of evil” with the political movement Muslim Brotherhood and the armed groups al-Qeda and the Islamic State of Iraq and the Levant (ISIL, also known as ISIS).

Reacting to the Hitler reference, Reza Akbari, programme manager of the Washington-based Institute for War and Peace Reporting, said it is “hardly new”.

“It is however destructive and unwise discourse. It does not accomplish anything but to fan the flames of rhetorical bullying. A language Iranian leaders are also well-versed in.”

King Salman reiterated Riyadh’s support for a Palestinian state with occupied East Jerusalem as its capital in a phone conversation with Trump on Tuesday.

According to the official Saudi Press Agency, Salman “reaffirmed the kingdom’s steadfast position toward the Palestinian issue and the legitimate rights of the Palestinian people to an independent state with Jerusalem as its capital.”

The Saudi-sponsored 2002 Arab League Peace Initiative offered normalisation of ties with Israel in exchange of full withdrawal from territories it had occupied in the 1967 war’s aftermath.

It has most recently been re-endorsed at the 2017 Arab League Summit held in Jordan. 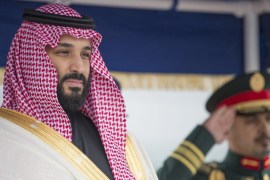 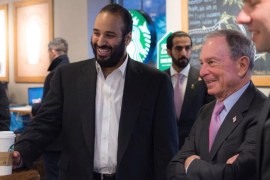