The exiled leader of the communist party of the Philippines declared that negotiators from the rebel group were ready to resume stalled peace talks with President Rodrigo Duterte’s government.

In a statement to Al Jazeera on Tuesday, Jose Maria Sison said it was the Duterte administration that is “showing hesitance, or even outright negative attitude” towards negotiations.

“If they are willing, then the National Democratic Front of the Philippines (NDFP) is also willing and ready to negotiate with them,” Sison said, referring to the political arm of the Filipino communist rebels.

“It takes two sides to negotiate,” said Sison, who has been in exile in The Netherlands for more than 30 years now.

He blamed the government and the Philippine military for “interrupting, delaying and even repeatedly terminating the peace negotiations”, by pushing away rebel representatives from the negotiating table.

Earlier on Tuesday, Duterte hinted that he also wanted to “talk peace” with the rebels, despite calling them “terrorists”.

“You know, we are not enemies. Even if I want to fight, my heart tells me that I am killing my fellow Filipinos. But the problem is you are doing the same,” he was quoted by the news site, the Philippine Star, as saying.

In November, Duterte abruptly called off peace talks with rebels in Norway and the Netherlands.

He said deadly attacks on government troops and the police proved that the rebels were not sincere in the negotiations.

The Duterte administration has been engaged in on-and-off peace negotiations with the rebels since mid-2016 when the president came into office and declared a ceasefire.

Following new clashes between government forces and rebels in 2017, Duterte signed a proclamation labelling the communist fighters a “terrorist” group, breaking off the entire peace process.

The military has also compared the communist rebels to armed Muslim fighters, who have pledged allegiance to the Islamic State of Iraq and the Levant (ISIL, also known as ISIS).

In one of the bloodiest encounters in recent years, the military claimed that it killed more than a dozen rebels in the Philippine province of Batangas in December.

The communists insist they are fighting for social justice and equality, and they want to establish a government that addresses those concerns.

The rebels launched an armed struggle in 1968 that has so far claimed the lives of more than 30,000 people, in one of the longest communist insurgencies in the world.

In February, Duterte offered a $384 bounty for each communist rebel killed, prompting accusations that he is inciting the military to commit war crimes.

He also drew condemnation from human rights watchdogs and women’s groups after he said female communist rebels should be shot in their genitals to make them “useless”.

According to the Philippine military, there are an estimated 3,700 communist rebel fighters left in the country. The rebels, however, say the number is much higher than that.

Sison previously criticised Duterte for issuing such statements, saying the president was “acting like the chieftain of a criminal gang”.

Should the government decide to resume talks, it should not impose preconditions on the rebel group “that negates the character and purpose of peace negotiations”, Sison told Al Jazeera. 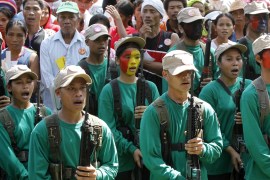 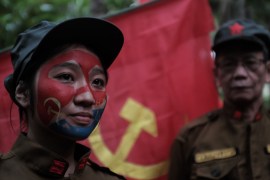