Armenia could have a new prime minister by next week, after nearly two weeks of street protests forced Serzh Sargsyan to quit.

The country’s parliament is expected to hold a special session on May 1 to debate and possibly elect a new leader, a statement published on the parliament’s website on Thursday said.

Sargsyan resigned on Monday, following days of protests in Yerevan against his government, which critics accuse of corruption and authoritarian rule.

Opposition leader Nikol Pashinyan, who led the demonstrations, is shaping up as the favourite to replace him.

“The Republican Party has lost its power, and should recognise the victory of the people without any conditions,”  he told Al Jazeera.

On Tuesday, he called on supporters to stage a rally after talks with the ruling Republican Party were cancelled, prompting thousands of protesters to return to the streets on Wednesday.

“We want justice, and we want Nikol Pashinyan to be the prime minister,” Lili Arakilyan, a young protester, told Al Jazeera.

Reporting from Yerevan, Al Jazeera’s Robin Forestier-Walker said police have “ceased to intervene. Instead, they have retreated to protect government buildings.”

Keran Karapetyan, the acting prime minister, has said he was ready for elections, but not on the street.

“I don’t know of any country where the people’s candidate is elected [through protests]. That’s why we have elections. There are some in the citizenry who are disappointed,” he said.

“How are we to measure their desire to have Nikol Pashinyan against the desires of others in the citizenry who want a different candidate?”

Although the demonstrations have been peaceful, the upheaval has threatened to destabilise Armenia, an ally of Russia, in a volatile region riven by a decades-long, low-level conflict with neighbouring Azerbaijan.

Pashinyan said on Wednesday that he had received assurances from Russian officials that Moscow would not intervene in the crisis, and Edward Nalbandian, Armenia’s foreign minister, was in Moscow on Thursday for talks. 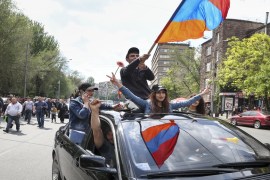 Prime Minister Serzh Sargsyan steps down amid protests, says he will not be involved in “required solutions” to unrest. 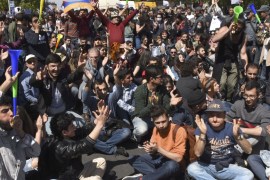 A very potent protest movement is emerging in Armenia

Self-organising and deeply grass-root, the protest movement in Armenia has the potential of introducing genuine change.