A North Korean nuclear site in the country’s north has collapsed, threatening an “unprecedented risk” of radioactive fallout including in neighbouring China, the South China Morning Post (SCMP) newspaper reported.

The Hong Kong-based publication said on Wednesday that the collapse at Punggye-ri near the border with China “may” be the reason why North Korean leader Kim Jong-un declared an immediate halt of its nuclear and missile tests, according to one researcher,

The newspaper report said the test site was “wrecked” beyond repair.

The suspension of the tests on Friday came as North Korea prepared for a landmark summit with South Korea, as well as a breakthrough meeting between Kim Jong-un and US President Donald Trump.

Kim is to meet South Korean President Moon Jae-in at a border village on April 27, and Trump in the coming months for separate summit talks.

This week’s inter-Korean summit will be the first such meeting since 2007, and only the third since the 1950-1953 Korean War.

Earlier, it was also revealed that Kim held secret talks with Trump’s incoming secretary of state, Mike Pompeo, who had also served as his CIA director.

Last year, after conducting its most powerful nuclear test ever and saying it had successfully tested its first intercontinental ballistic missile, North Korea announced that its nuclear programme was complete.

The last five of six nuclear tests by Pyongyang were conducted in Mount Mantap, including the test on September 3, 2017, which caused the collapse of the mountain.

The report quoted geological experts in China as saying that the mountain collapsed after the detonation of a warhead weighing 100-kilotonnes about 700 metres below the mountain’s peak.

Mount Mantap is about 75km to the nearest Chinese city of Baishan in Jilin province, which has a population of 1.2 million people.

According to the newspaper, there had been growing fears in China that the test in September had caused a “fallout leak” coming from cracks in the damaged mountain.

Satellite images published by the SCMP on Wednesday showed a mountain with thick green vegetation that turned reddish brown after the test and mountain collapse.

At the time of the test, the US Geological Survey reported a magnitude 6.3 earthquake with a depth of 23km. China later said it had also detected a second quake in North Korea of magnitude 4.6, eight minutes after the initial tremor.

The quake was felt as far away as the Chinese city of Changchun around 400km northwest of North Korea’s test site at Punggye-ri, according to state broadcaster CCTV. 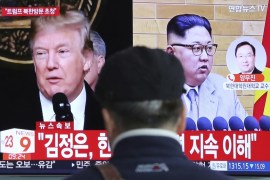 Can Trump get Kim Jong-un to give up his nuclear ambitions?

After trading insults for most of 2017, will the two leaders be able to set aside their differences? 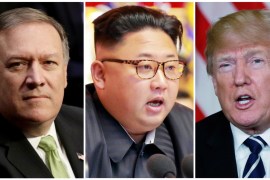