Kenya’s rainy season has set in with a vengeance leading to widespread flooding across central and southern parts of the country.

At least five people are known to have died in the latest spell of seasonal downpours. The deadly flooding occurred in Isiolo County, around 450km to the northeast of Nairobi.

Saturated soil was also responsible for landslides around 100km to the southeast of the capital where 30 homes were buried in Kilungu, Makueni County.

Kenya has two wet seasons and these are determined by the winds. There is the hot northeast monsoon or kaskazi blowing dry air in from the Arabian Gulf from November to March and April. In spring, this is replaced by the warm, moist kusi monsoon blowing in from the southeast from April/May to October.

Recent days have seen torrential downpours in Nairobi with 54mm of rainfall in the 24 hours up to 06:00 GMT on Tuesday. This follows a very wet weekend.

That makes a total 110mm here in the past four days. April is Nairobi’s wettest month, but that is around half the monthly average for the nation’s largest city.

There looks to be no respite in sight with the Kenya Meteorological Department (KMD) warning of heavy downpours over the next few days.

“Most parts of the country will continue receiving rainfall and areas such as the lake region, around Rift Valley highlands will experience intense showers and thunderstorm,” he said. 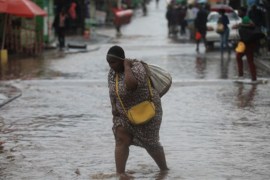 Many parts of the country have been hit by unseasonable downpours, which have caused travel disruption. 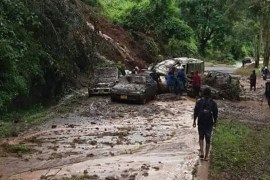 Heavy downpours cause floods along eastern parts of Kenya and Tanzania.