Iran’s President Hassan Rouhani has declared that Tehran will not wait for any permission to produce the weapons it needs to defend the country.

In a speech marking Iran’s Army Day on Wednesday, Rouhani said a strong military is an effective deterrence against foreign threats.

“If there is any weapon we need, we will develop it for the most part, or procure it if necessary,” Rouhani was quoted by Iran’s Mehr news agency as saying.

“We will not wait for approval from the world.”

Rouhani said countries that rely on their domestic capabilities “feel the true sense of sovereignty and power”.

In recent days, there have been reports that European countries are considering measures against Iran’s ballistic missile programme, in an effort to persuade US President Donald Trump to maintain the Iran nuclear deal.

Iran has insisted that its missile programme is not negotiable. It said it is only for defence purposes, and not intended to carry any nuclear weapons.

During the military parade in the capital Tehran on Wednesday, Iran’s military unveiled its domestically manufactured missile system, Kamin-2, which is a portable device designed “to target enemy drones flying in low altitude”, according to the English-language state television, Press TV.

Other military hardware on display were several missile and radar systems, as well as tanks, armoured vehicles and sniper rifles.

At the event, Rouhani declared that Iran’s armed forces have never been more influential “on the course of regional and global developments”.

He warned Western powers against flooding the Middle East with more weapons, saying they are driving conflict in the region.

“I am calling on them to stop filling up our region with various weapons for the sake of their own interests,” he said.

Rouhani said the only path to establish peace in the region is through diplomatic and peaceful means.

“We want friendly ties with neighbouring countries and want them to know that our weapons, missiles and tanks will not be used against any of them,” Rouhani said.

Saudi Arabia and its allies consider Iran as a threat to regional security, accusing Tehran of being a “state sponsor of terrorism”. 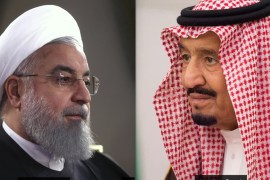 Iran and Saudi Arabia ‘unlikely’ to pivot back to diplomacy 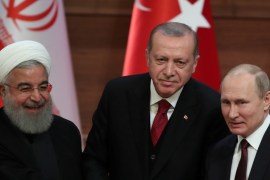 Can Russia, Iran and Turkey agree on a roadmap for Syria?

The three regional powers still don’t seem to be capable of moving beyond fixing the current status quo in Syria. 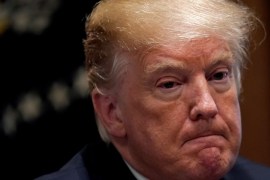 Iran will be forced to withdraw from the historic nuclear deal if it does not gain any economic benefits from it.