The US, UK and France have launched strikes “on targets associated with the chemical weapons capabilities” in Syria, US President Donald Trump announced early on Saturday.

The strikes came after a suspected chemical weapons attack in the former rebel stronghold of Douma last weekend.

Here are all the latest updates on the strikes:

Haley: US troops to stay in Syria until goals achieved

Putin: Further Syria strikes to cause chaos in international ties

Syria: Strikes hit ‘parts of but not the heart’ of programme

Haley: If Syria uses toxic gas again, the US is ‘locked and loaded’

Chemical inspectors from The Hague arrive in Syria

Pentagon: US air strikes dealt a ‘severe blow’ to Syria

A perfectly executed strike last night. Thank you to France and the United Kingdom for their wisdom and the power of their fine Military. Could not have had a better result. Mission Accomplished!

What are Syrians saying about the US-led attacks?

What media in Russia, Iran and Syria are saying

May declines to say if Assad can stay after missile strikes

Germany: Strikes were ‘necessary and appropriate’

May: It was right and legal to take military action in Syria

May: We’re clear Syrian government is responsible for chemical attack

UK’s Corbyn: May should have sought parliamentary approval

Turkey was ‘informed’ before strikes on Syria

Syria: Strikes will not affect army in any way

Russia: Most missiles fired at Syria were intercepted

Strikes in Syria did not hit areas near Russian bases: Moscow

Russia: ‘Pre-designed scenario is being implemented’

Statement by the Ambassador Antonov on the strikes on #Syria:
A pre-designed scenario is being implemented. Again, we are being threatened. We warned that such actions will not be left without consequences.
All responsibility for them rests with Washington, London and Paris. pic.twitter.com/QEmWEffUzx

NATO chief: I support actions of US and allies

Syrian opposition leader: All attacks on civilians must stop

Russia: Syria hit as country had ‘chance for peaceful future’

US top general: US did not notify Russia of targets

US chairman of joint chiefs of staff: First wave of attacks ends

Russia warned ‘such actions won’t be left without consequences’

Mattis: ‘Right now, this is a one-time shot’

UK’s Theresa May: Strikes meant to ‘deter the use of chemical weapons’ 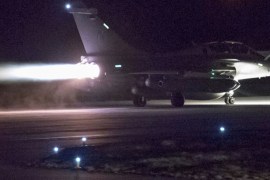 US and allies strike Syria: The full story

US hits Syrian ‘chemical weapons sites’, in collaboration with UK and France, as Russia and Iran warn of consequences. 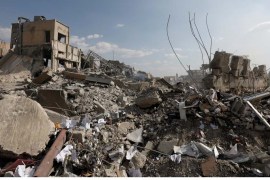 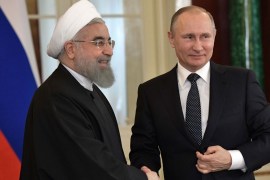 Putin: US-led strikes on Syria ‘an act of aggression’

Moscow and Tehran have warned that there would be consequences for the US-led attacks on Syria.