Sri Lanka imposed a curfew in a central town popular with tourists after days of unrest between religious communities with a Buddhist man killed and Muslim businesses set ablaze.

Police said on Monday there had been riots and arson attacks since the weekend in Kandy district, while sources told Al Jazeera the violence was spreading throughout the South Asian island nation.

“The curfew was imposed to control the situation in the area,” said police spokesman Ruwan Gunasekera.

Police officers were placed on heightened alert in Kandy to ensure the “situation does not spiral into inter-communal conflagration”, the government said in a statement.

Mobs set fire to Muslim-owned businesses and attacked a mosque in the east of the country.

Local officials said more than two dozen suspects had been detained by police in connection with the spate of arson attacks, while senior officers also launched an investigation into the conduct of the police.

Rajith Keerthi Tennakoon, executive director of the Centre for Human Rights Sri Lanka, condemned the “unfathomable police inefficiency” that he said led to the violence.

“Social media pages rallied Sinhalese mobs to assemble in Teldeniya town at 10am. At 11am, there was a proclivity for violent confrontations to take place as mobs gathered. The destruction of Muslim properties started taking place from around 1pm,” Tennakoon told Al Jazeera.

Kandy is the latest region to be plagued by religious and ethnic conflict in Sri Lanka, a nation of 21 million people.

For 30 years #SriLanka you witnessed your streets run red with the blood of your children. Have you forgotten the loss? The fear? The pain? The suffering? Have you learned nothing? When will you see reason? When will you act? #StandAgainstRacism #OneNationOnePeople #lka pic.twitter.com/hJefq0d14G

Najah Mohamed, secretary of the National Front for Good Governance party in Sri Lanka, told Al Jazeera attacks are spreading all over the country, not just in Kandy.

“We are facing the same situation that we had experienced with the previous government with tension, hate, and violence against Muslims are rampant especially where they are a dispersed community,” said Mohamed.

Religious and ethnic violence can turn deadly in Sri Lanka, where Muslims account for 10 percent of the population and Buddhists Sinhalese make up nearly 75 percent.

“The violent BBS mobs manipulated the situation to fuel attacks against Muslims in an unprecedented way and started attacking people. In the afternoon the police and curfew were here, but there are still rising underreported incidents taking place,” Mohamed said.

Religious violence is not new to the island. An anti-Muslim campaign was launched following the deadly Aluthgama riots in June 2014.

President Maithripala Siresena had vowed to investigate anti-Muslim crimes after assuming power in 2015, but no significant progress has been reported.

Sirisena and Prime Minister Ranil Wickremasinghe are yet to make an official statement on the recent unrest.

Tasnim Nazeer contributed to this report

It would be great to see a statement from @PresRajapaksa callling for an end to attacks on #SriLanka Muslims and prosecutions of all who take part in religious violence & targeting of Muslim businesses. Silence is destructive. 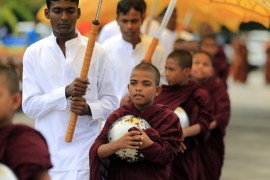 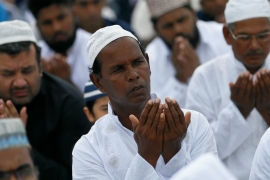 Spate of recent mosque and Muslim-business attacks blamed on hard-line Buddhist leader who is now on the run. 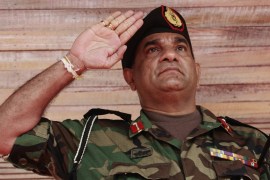 President says he will not allow ‘anyone in the world’ to touch Jagath Jayasuriya after rights groups sue ex-army chief.