The measure follows a local curfew that was imposed on Monday in the central city of Kandy, after days of unrest between religious communities, which was triggered by the death of MG Kumarasinghe, a Buddhist man from Medamahanuwara in Kandy district.

The 41-year-old succumbed to his injuries after being assaulted by a few Muslim youth, who were reportedly under the influence of alcohol.

This incident had taken place over a motor accident a few days ago and was a domestic dispute that was not racial in nature.

The assailants are currently in police custody.

This was also confirmed by a source from the office of President Maithripala Sirisena, who lauded the efforts of the local residents in settling the matter.

However, violence erupted on Monday in Teldeniya and many Muslim shops were burned to the ground by radical Sinhalese mobs.

Damage has also been inflicted to Muslim homes and mosques, with many vehicles being torched.

Witnesses on the ground estimate that the damage seem similar in proportion to the initial stages of the anti-Muslim violence that took place in Alutgama in 2014.

Police said on Monday there had been riots and arson attacks since the weekend in Kandy district, while sources told Al Jazeera the violence was spreading throughout the country.

In the past, religious and ethnic violence had turned deadly in Sri Lanka, where Muslims account for 10 percent of the 21 million population, and Buddhists Sinhalese make up nearly 75 percent.

Another 13 percent of the population are Hindus.

Speaking on the grounds of anonymity, a senior moulavi [religious leader] from Kandy told Al Jazeera that “senior police officials gave assurances to the Muslim community that law and order will be maintained, however all these violence and damages were inflicted despite these assurances”.

Local observers report the presence in the Kandy district of Ampitiye Sumana, a Buddhist monk from the eastern district of Battacaloa.

Ampitiye Sumana has a well-documented track record of aggression towards Muslims and Tamils in Eastern Province.

Amith Weerasinghe, leader of the Maha Sohon Balakaya, a radical Sinhalese Buddhist organisation which has been inciting Buddhists against Muslims, was also seen in the district.

Many observers on social media and other sources point to the presence of these two individuals who are allegedly specifically in the area to ignite and escalate racial tensions.

The moulavi went on to state that dozens of properties including Musli- owned shops and homes have been completely torched.

“The Kengalla Jummah Mosque has been completely burned to the ground,” he cried.

At least one death has been reported due to the riots. The body of 24-year-old Abdul Basith was pulled out today from one of the homes that was set on fire on Monday.

In February 2018, five people were wounded and several shops and a mosque were damaged during a clash between Buddhist and Muslim groups.

In June 2014, an anti-Muslim campaign was launched following the deadly Aluthgama riots.

Many social media commentators have taken to Twitter and Facebook to highlight the importance of maintaining law and order.

The damaging consequences of Sinhalese nationalism and the imperative for it to be stemmed is being discussed widely.

Speaking to Al Jazeera, Vindhya Buthpitiya, an anthropologist based in Sri Lanka, said: “The only thing standing between Sri Lanka and reconciliation/a cohesive society is noxious Sinhala Buddhist nationalism. This reality, coupled with the grotesque ways in which it has become an expedient tool for political manoeuvring, has led to endless death and devastation.”

Commentators were also critical of the manner in which many government politicians had taken to Twitter to express their dissatisfaction when concrete steps could have been taken to stem the violence.

However, some ministers were particularly critical of political support hardline Buddhist nationalist enjoy.

Mangala Samaraweera, the finance minister, said on Twitter: “Enough is enough. Inciting racial violence must be made a nonbailable offence & politicians who give leadership should have their civic rights revoked.”

The Prime Minister mentioned in parliament on Tuesday that the government would take stern action against the perpetrators of the violence in Kandy and that compensation would be paid to those who have suffered damages to their properties.

However, speaking under a pseudonym, JM Hibishi, a school teacher who’s house was attacked in the anti-Muslim riots of Gintota, told Al Jazeera: “The prime minister was here in Gintota the day after the riots, and promised that the damages will be compensated within 2 weeks.

Many commentators have pointed to the fact that many hardline Buddhist organisations inciting violence are supporters of Mahinda Rajapakse, whose Sri Lanka Podujana Peramuna swept the recent local government elections.

However, Kalana Senaratne, a senior lecturer at the University of Peradeniya, told Al Jazeera “the primary responsibility for the protection of the citizens falls on the government”.

“The government appears to believe quite mistakenly, that the source of any form of racially-motivated violence which takes place under its watch could be attributed to or linked with the previous Rajapaksa-regime,” Kalana said. 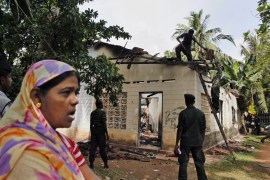