Islamabad – Pakistan’s ruling PML-N and opposition PTI parties have both alleged wrongdoing in the country’s recently concluded Senate elections, with PTI chief Imran Khan accusing members of his own party of “selling” their votes.

Khan made the accusation during a political rally in Karachi, Pakistan’s largest city, on Monday.

Pakistan’s Senate election is held through an indirect ballot, with members of the four provincial assemblies and the national assembly voting in nominees.

As such, the outcome of the polls tends to be predictable, based on the proportional representation of each party in the assemblies.

Cricketer-turned-politician Khan, however, alleged that some legislators, whose votes are kept secret, sold their votes to rival parties to help them secure greater representation in the Senate.

Legislators voted for 52 vacant Senate seats on Saturday, with the PML-N emerging as the largest party in the 104-member house, with 33 seats.

They are followed by the Pakistan People’s Party (PPP), with 20 seats, a group of independents with 17 seats and the PTI with 12 seats.

The results saw several seats that were expected to go to the PML-N and PTI go instead to the opposition PPP, led by former President Asif Ali Zardari.

“Our own people have also sold themselves,” said Khan at the Karachi rally. He said some members of his party had been offered roughly $365,000 for their votes.

“I salute those who chose not to do so. Those who traded votes for money will be dealt with strictly,” he said.

Khan called for the Supreme Court and Election Commission to conduct an inquiry into the allegations but did not name specific legislators he believed had sold their votes.

Nawaz Sharif, the chief of the PML-N, also raised questions regarding the conduct of the polls, speaking outside a courtroom in Islamabad on Monday.

Sharif called for an investigation into the “rigging of the Senate elections” in brief comments to media outside an accountability court in Islamabad on Monday.

The former prime minister is facing corruption charges for allegedly funnelling state cash into his family’s accounts during his previous two stints in power in the 1990s.

Marriyum Aurangzeb, the minister of state for information and a senior PML-N leader, meanwhile, accused the PTI of having bought votes in Punjab province, the country’s largest and the PML-N’s heartland.

“Those who were trying to give lessons of morality and crying hoarse to end corruption from Pakistan used money to win elections,” she alleged, according to the News newspaper.

Members of the MQM, the most prominent party in Karachi, also alleged wrongdoing in the Senate polls, where they won just one seat.

Farooq Sattar, a senior MQM leader, alleged that 15 members of his party were “forced” to change their votes, although he did not elaborate on who forced them to do so.

In a separate development, the Supreme Court on Monday halted the official appointment of four newly elected senators – Chaudhry Muhammad Sarwar of the PTI and Haroon Akhtar, Nuzhat Sadiq and Saadia Abbasi of the PML-N – based on allegations that they held dual nationality.

The court has requested evidence from the Election Commission that the four members had renounced their second citizenship. 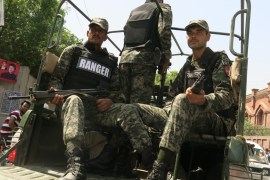 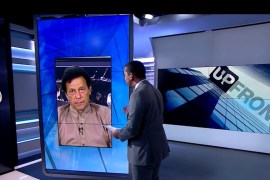 Politician and ex-cricketer has frank discussion with Al Jazeera about the armed group he is accused of supporting.