Leaked emails show that a businessman with ties to the United Arab Emirates (UAE) tried to convince US President Donald Trump to fire Secretary of State Rex Tillerson for not supporting the UAE-backed blockade of Qatar, the BBC reported.

According to the emails obtained by the news outlet, Elliott Broidy, who is also a major Trump fundraiser, met President Donald Trump in October 2017 and lobbied against the top US diplomat for “performing poorly”.

The emails appear to confirm earlier reports of the existence of a memo by Broidy, allegedly confirming attempts to implement US policies in favour of the UAE.

Saudi Arabia, the UAE, Egypt and Bahrain severed diplomatic and transport ties with Qatar on June 5, accusing it of supporting “terrorism”. Qatar has repeatedly rejected the allegations as “baseless”.

Tillerson criticised urged Saudi Arabia and other Gulf and Arab states to ease the blockade, which contradicted what appeared to be Trump’s initial support for the move.

In the emails, Broidy calls Tillerson “a tower of Jello” and says the secretary of state “needs to be slammed”, the BBC reported.

He also criticises Qatar, calling it a “television station with a country”. Broidy has been a vocal opponent of Al Jazeera.

Broidy says Trump thought it was a “good idea” to schedule a meeting with Mohammed bin Zayed Al Nahyan, the crown prince of Abu Dhabi.

A spokesman for Broidy told US media that the businessman has “reason to believe” Qatar hacked his emails. Qatar denied the allegations.

According to the New York Times, Broidy owns a company that has hundreds of millions of dollars in contracts with the UAE.

Emails regarding Broidy’s meeting with Trump were sent to George Nader, a Lebanese-American businessman and adviser to the de facto ruler of the UAE.

According to the New York Times, Nader was questioned by Special Counsel Robert Mueller about his ties to the UAE and his meetings with White House officials.

Nader was asked “for information about any possible attempts by the Emiratis to buy political influence by directing money to support Mr Trump during the presidential campaign, according to people who knowledge of the discussions,” the newspaper reported earlier this week.

Mueller is investigating alleged Russian interference in the US 2016 presidential elections.

Nader, who is described as a White House regular, allegedly took part in discussions of American foreign policy in the Gulf region with then-chief strategist Stephen Bannon and senior adviser Jared Kushner, who is also Trump’s son-in-law, shortly after Trump took office.

Analysts say the reports show the extent of influence the UAE may have in Washington.

“It seems as though the Emiratis have invested so much,” Mohammed Cherkaoui, a professor at George Washington University, told Al Jazeera.

“There is now this overconfidence they can have their way in the US administration,” he said.

“What is alarming is not an act of regular or natural lobbying that is part of the game in Washington, but that you have two agents trying to establish a direct link between Trump and Mohammed bin Zayed.”

The Washington Post reported last month that four countries, including the UAE, may have attempted to exploit Kushner’s lack of experience and his family’s business debt to influence the US administration’s policies. 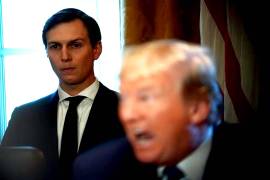 Conflicts of interest in the White House?

Donald Trump’s son-in-law Jared Kushner is reported to have used his influence to boost the family business. 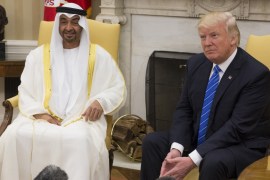 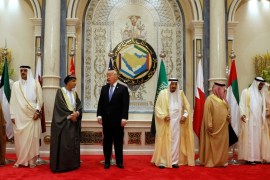