Flooding is gripping Madagascar as a tropical cyclone swirls close to the island.

The storm, named Dumazile, formed two days ago and since then has been throwing torrential rain across Madagascar.

The cyclone is moving painfully slowly, at only 17 kilometres per hour, ensuring the heavy rain continues to fall for a prolonged period.

In the north of the island nation, Antsiranana has reported 201 millimetres of rain in the last 48 hours. In the east, Toamasina has been hit by 210 mm.

Antsiranana is likely to have seen the worst of the weather and conditions in the city should now improve, but Toamasina is likely to see more heavy rain over the next couple of days.

As the storm moves southwards, its winds are strengthening. In approximately 24 hours, Dumazile is expected to reach its maximum intensity, with sustained winds of 195 kph and gusts of up to 240 kph.

With winds this strong, it would be classed as a powerful category 3 hurricane on the 5-point Saffir-Simpson scale if it were situated in the waters around the Americas.

Fortunately, the eye of the storm, where the strongest of the winds are located, is forecast to remain over the sea. Rain is expected to be the greatest hazard for the region, with further flooding likely.

Madagascar is no stranger to tropical cyclones. In January, powerful Cyclone Ava killed dozens of people when it slammed into the island. Again it was the east of the country which was worst hit, with Toamasina seeing some of the worst of the damage. 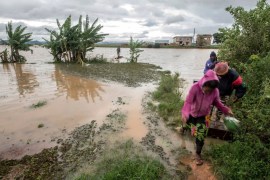 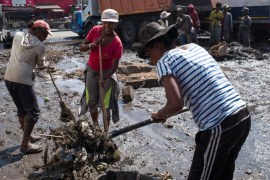 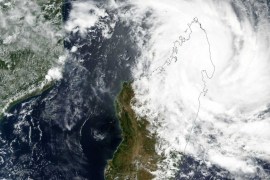 Cyclone Enawo makes landfall in northeastern Madagascar, packing winds of up to 270 kilometres per hour.