Civil rights activists vowed to keep the pressure up on the US government to deal with police misconduct as they attended the funeral of Stephon Clark, 22, father of two, and the most recent victim of a string of fatal shootings of black men by police.

“We’re going to make [US President] Donald Trump and the whole world deal with the issue of police misconduct,” the Reverend Al Sharpton, veteran civil rights leader, told a congregation of hundreds at the funeral in Sacramento, California on Thursday.

Clark was shot dead on March 18 outside his grandmother’s backyard in Sacramento by police responding to a report that someone was breaking windows.

Police said the officers who shot at Clark 20 times feared he was holding a firearm, but it was revealed later that the young father was only holding a mobile phone.

NOW: Funeral services for #StephonClark are happening now in Sacramento. We're on the ground. https://t.co/p8WWEy1Ubs

More than a week of protests

More than 100 protesters gathered in central Sacramento after the funeral for the latest rally in more than a week of demonstrations, which sometimes blocked the traffic, according to LA Times.

“I have three young sons and I want to make sure they see change in their lifetime,” Aisha Pride, a 31 year old protester, was quoted as saying. “If we keep being quiet, nothing is going to change.”

The shooting was not surprising, but rather “common” and “expected”, Lena Williams, a mother of three who went to Clark’s funeral to demonstrate against police brutality outside the church with her children, the LA Times reported.

The killing of Clark has reignited the call to end what activists say is institutionalised racism among US police forces.

According the Washington Post’s Fatal Force database, more than 980 people were killed by police in 2017. The Guardian identified more than 1,090 police killings the previous year.

Nearly a quarter of those killed in 2016 were African Americans although the group accounts for roughly 12 percent of the total US population.

According to a watchdog group The Sentencing Project, African American men are six times more likely to be arrested than white men.

On Tuesday, a prosecutor in the US state of Louisana ruled out criminal charges for two white police officers in the 2016 killed of African American Alton Sterling.

In the wake of Clark’s death, protests have been held from Sacramento to New York City, calling for reform across the country.

Many online have also expressed outrage.

I still can’t, and will never understand how people will ALWAYS try to justify the shooting of unarmed POC. “Oh he was smashing windows. Ooh he was this. He was that.”
No. The simple truth is that if the person were white, they would most likely still be ALIVE. #stephonclark

The fact that we are having another funeral for the death of another unarmed black man due to police brutality irritates me. #StephonClark #sayhisname 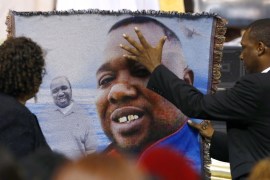 Family of Alton Sterling expresses frustration after decision to not pursue criminal charges against police officers. 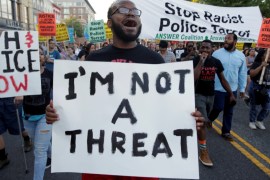 Recently released FBI and DHS documents reveal how the US government sees the movement as a potential threat. 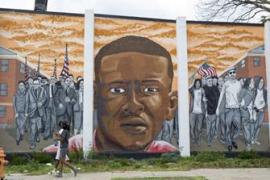