A Palestinian farmer has been killed by Israeli artillery fire near Khan Yunis in Gaza, the Palestinian health ministry said.

According to eyewitnesses, the victim, identified by the ministry as 31-year-old Omar Samour, was on his land near the border when the incident occurred on Friday, AFP news agency reported.

There was no immediate confirmation from the Israeli army of the strike.

Twenty-seven Palestinians have also been wounded by Israeli forces since Friday morning, including seven east of of Khan Yunis in the south and Gaza City in the north, according to sources on the ground.

The incident comes just hours before a major demonstration commemorating Land Day, which marks the day – March 30, 1976 – when six Palestinian citizens of Israel were killed by Israeli forces during protests over Israeli land confiscations.

Friday’s demonstration is also set to kick off six weeks of protests leading up to the inauguration of the new US embassy in Jerusalem around May 14.

The six-week-long protest calls for the right of return of Palestinian refugees to their homes in what is now considered Israel.

The biggest protest on Friday is set to take place in the Gaza Strip, where tents have been set up some 700 metres from the border. 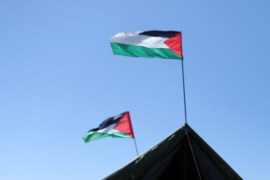 Protesters will live in tents erected at the nearest point from the border with Israel. 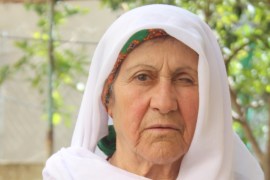 For first time in 70 years, Palestinians return to their villages

To commemorate Land Day, group of Palestinian refugees returned to the villages they were expelled from in 1948. 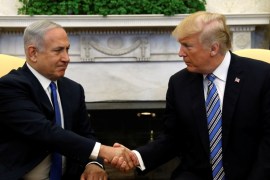 What will Trump’s ‘ultimate deal’ mean for Palestinians?

Recent leaks show that Trump is planning to establish a mini-Palestine only consisting of Gaza and half of West Bank.