Washington, DC – Hundreds of thousands of students, teachers and their supporters have converged on Washington, DC, and other cities worldwide to march for their lives, demanding US legislators address recent school shootings and strengthen gun control laws.

Edna Chavez, a teen from South Los Angeles, was among the students from all over the country who took the stage at the March for Our Lives rally on Saturday in the nation’s capital.

“I have lived in South LA my entire life and have lost many loved ones to gun violence,” she added, speaking about the death of her brother, Ricardo, who was killed by a bullet when he was in high school, and how the trauma and loss changed her life.

“This is normal; normal to the point that I have learned to duck bullets before I learned how to read.”

The rally is led by survivors of last month’s shooting at Florida’s Marjory Stoneman Douglas High School, where 17 people were killed after a former student allegedly went on a shooting rampage inside the school.

Students, under the banner #NeverAgain, are demanding that Congress pass a law banning assault weapons, halt the sale of high-capacity magazines to restrict access to ammunition and tighten the background check process.

They are also calling for a bipartisan effort to ramp up gun control and demanding “a comprehensive and effective bill be immediately brought before Congress to address these gun issues”.

“No special interest group, no political agenda is more critical than timely passage of legislation to effectively address the gun violence issues that are rampant in our country,” the March for Our Lives website said.

Saturday’s march comes off the back of the National School Walkout earlier this month when thousands of students and teachers walked out of the classroom for 17 minutes to remember the victims of last month’s shooting and demand stricter gun control.

Winter BreeAnne Minisee, a high school senior from Los Angeles, was part of the committee that organised the national walkouts. She was not going to miss Saturday’s rally.

“Today is a great day to stand in solidarity with students from across the country and make sure our voices are being heard,” she said.

Angela Bahena drove 10 hours with her mother and two younger siblings from Paris, Kentucky, to attend the rally.

“It’s my last year of high school and I want to make sure that I leave knowing my brother and sister are safe in school and they don’t have to worry about someone just randomly coming in and killing people,” she said.

Kaleab Jegol travelled from Cincinnati, Ohio because he says gun control is an intersectional issue.

“Gun violence … not only affects people in school shootings but also black and brown communities, which is a community I come from,” he said. “It’s very personal … because it can happen to me in my own school or community.”

He told Al Jazeera legislators have ignored voters demands for extended background checks and the banning of assault rifles “for far too long”.

“They’re willing to take the NRA’s (National Rifle Association) money and place it over my life and I and all the people that are marching are saying ‘No, we won’t take that’,” he said.

More than 800 sister marches are paralleling the mass demonstration in Washington, DC, including protests in Los Angeles, New York City, London and Tokyo.

Here in London at the American Embassy. So many signs here referenced the success of gun control laws in the UK and other countries. Gun deaths are a fraction per capita. #MarchForOurLives pic.twitter.com/MDlWReGoyx

I joined #MarchForOurLives in Frankfurt/Germany – because there shouldn't have to be any drills in school but fire drills, and because no kid should have to announce that they haven't a gun, but a phone in hand. #NeverAgain #blacklivesmatter #GunControlNow pic.twitter.com/EpgMFmz1aE

March for Our Lives vigil in Shibuya, Tokyo, Japan. Democrats Abroad standing with all those marching in the states for gun control. pic.twitter.com/wV1kK7txSg

Deaths from gun violence have remained constant through the years and have a major impact on children and teens. Gun-related deaths are the third-leading cause of death for children and approximately three million are exposed to shootings each year, according to Everytown for Gun Safety Support Fund, an organisation advocating for gun control.

Meanwhile, pro-gun ownership special interest groups, including the NRA, in the country are calling for the arming of school teachers to prevent future violence – a proposal that has been slammed by many students and teachers.

Following the Florida shooting, Donald Trump embraced the NRA’s position to arm teachers with guns saying he would devote federal funding to train qualified teachers to handle weapons at schools.

‘We need to talk about black communities too’

Caught between gun control debates are the young people affected by gun violence.

While Saturday’s demonstration includes diverse students from hundreds of US cities, students of colour say they have had to deal with gun violence all their lives.

Research on the disparity in gun homicide rates has shown that gun violence has a huge impact on black children, who are four times more likely to be killed with guns, Everytown has found.

“I think it’s extremely important that we talk about how students of colour do face other issues when it comes to guns,” Jared Sterling, a New York City high school student who joined the national walkouts earlier this month told Al Jazeera, prior to Saturday’s march.

“Lawmakers are proposing that teachers carry guns [and] that’s dangerous because you’ll never know if a teacher can retaliate against a student or if they worry about going outside and getting shot from anywhere else,” he also said.

“My school is about 25 percent black, but the way we’re covered doesn’t reflect that,” Hogg told Axios media on Friday.

So far, the Florida student activists have appeared to somewhat succeed in influencing the state of Florida to enact stricter gun control measures, including changing the minimum buying age to 21. The federal government has also moved to ban the devices that increase the firing speed of semiautomatic rifles, known as bump stocks.

Dozens of companies have also cut ties with the NRA after students launched the #BoycottNRA movement, threatening to boycott any firm that does business with the powerful gun lobby.

Moving forward, student activists plan to continue organising protests and galvanise youth to vote as a way to enact change.

“I think if 18-to-21-year-olds voted we would run this country, and we would have a progressive, like-minded, big-hearted country,” said Jegol.

“I think this movement will be the movement that shakes my generation and makes so many people realise that ‘I need to get up and vote or I can lose my sister or my cousin’.”

Students and gun control advocates have called for another national school walkout on April 20 to commemorate the Columbine High School shooting in which 13 people were killed in 1999.

Who are the US students leading mass protests for gun control?

In the wake of the mass shooting at a Florida high school, students nationwide are organising for stricter gun laws. 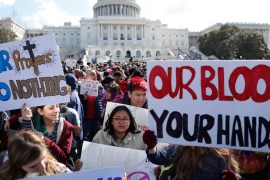 US protesters rally outside White House for gun control

Rally outside the White House comes amid a growing protest movement calling for stricter gun control laws in the US. 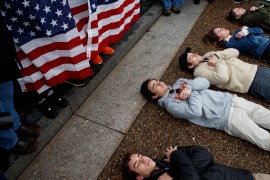 Students across the US walk out of class for 17 minutes to demand stricter gun controls and protection in schools. 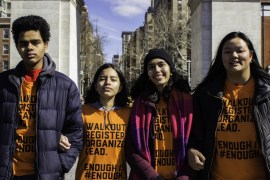