Athens, Greece – Propped up on the radiator next to a battered door is a half-charred plaque that welcomes visitors to the office of the Afghan Community in Greece.

The door, also burned, hangs loosely from the hinges.

Inside, a wooden desk is collapsed in front of a soot-blackened wall, a shattered computer monitor toppled sideways on the ground next to it.

Far-right attackers waited until office workers left for their lunch break on Thursday to break into the Afghan Community in Greece’s single-room workspace, and smash computers, speakers and framed photos on the wall, before dousing the office in petrol and setting it ablaze.

“It is good that no one was here, otherwise we would have had victims,” Yonous Muhammadi, former president of the Afghan Community in Greece and head of the Greek Forum of Refugees, tells Al Jazeera.

Muhammadi stands in the office and surveys the wreckage as reporters take photos.

He explains that the attack took place at a time when his organisation is receiving a swell of death threats from far-right groups.

It is good that no one was here, otherwise, we would have had victims.

Yonous Muhammadi, former president of the Afghan Community in Greece

The incident comes on the heel of a sharp uptick in far-right violence targeting refugees, migrants and Muslims, among others.

In a recent report, Al Jazeera detailed a string of violence targeting Pakistani labourers and Afghan refugees in Aspropyrgos, Athens and Piraeus, as well as a series of death threats against civil society organisations.

‘They want to kill’

“Crypteia is a new name for us,” says Muhammadi, explaining that the group was previously unknown before it took credit for an attack on an Afghan child’s home in November 2017.

During that incident, assailants hurled stones and beer bottles at the home of an 11-year-old boy – identified only as Emir in the local press – and left behind a note urging him to “go back to [his] village”.

Muhammadi adds: “They are extremists, and they want to kill.”

In January, a handful of civil society groups received death threats via telephone from an unidentified person claiming to be a member of Crypteia.

Standing in the half-destroyed office of the Afghan Community in Greece, where he came to show support, Naim Elghandour recalls receiving one of the threatening phone calls earlier this year.

“I picked up the phone, and they said: ‘We are the ones who kill refugees and Muslims, who burn mosques and who attacked Emir’s home,'” Elghandour, president of the Muslim Association of Greece, tells Al Jazeera.

“This wasn’t the first attack, and it won’t be the last,” Elghandour says. “We want protection [from the state].”

Researchers and critics have speculated that the far-right group may have direct or indirect connections to Golden Dawn, the neo-fascist party with 16 seats in the Greek parliament.

In the past, Golden Dawn members have carried out brutal attacks on migrants and political opponents.

After a party member stabbed to death Pavlos Fyssas, a Greek anti-fascist rapper, in September 2013, 69 members of the party – including its leading cadre – were arrested and put on trial for allegedly operating a criminal organisation.

‘Continue the fight against the Nazis’

The number of documented hate crimes subsequently decreased, but 2017 saw a sharp surge in xenophobic violence across the country.

Compared with the previous year, the number of hate crimes motivated by race, skin colour or national origin nearly tripled in 2017, according to statistics provided to Al Jazeera by the Hellenic Police.

Earlier this month, Greek police arrested seven alleged members of Combat 18 Hellas, a neo-Nazi outfit that has reportedly carried out more than 30 attacks on anarchist squats, left-wing social centres and Jewish memorials throughout the country.

For us, it's very important to stand with the Afghan community and fight. We have to continue the fight against the Nazis.

“For us, it’s very important to stand with the Afghan community and fight,” he tells Al Jazeera. “We have to continue the fight against the Nazis.”

Back in the Afghan Community in Greece’s office, Yonous Muhammadi recalls being attacked in 2010, when a band of far-right assailants armed with sticks and knives kicked in their door.

“I was teaching Greek to small children and women,” he remembers. “They [the attackers] started to break everything, and also they beat me.”

Afterwards, Muhammadi went to the police station in Agios Panteleimonas, an area in central Athens where the organisation’s office was located at the time.

“The shock for me was not the attack itself,” he says.

“The shocking thing for me was the behaviour of the authorities. When I spoke to the police, they said they’d put me in a detention centre if I filed a complaint.”

He hoped the situation would improve for refugees and migrants after Golden Dawn was put on trial.

“We believed that it would be better now, but no, we see that the fascists are still here,” he concludes, solemnly.

“All of them are the same extremist groups, and they are fascists.”

Editor’s note: This article has been updated to reflect that Yonous Muhammadi is the former president of the Afghan Community in Greece and is now the head of the Greek Forum of Refugees. 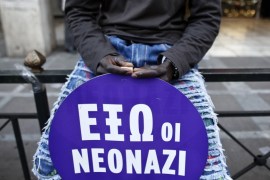 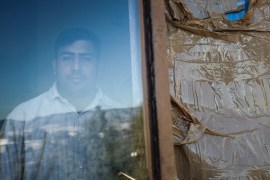 ‘We will cut your throats’: The anatomy of Greece’s lynch mobs

With anti-migrant violence hitting a fever pitch, victims ask why Greek authorities have carried out so few arrests.

Muslim Association of Greece and other groups receive menacing messages from caller boasting of racist attacks.