Civilians continue to flee Syria’s Eastern Ghouta and Afrin in record numbers as Syrian and Turkish military operations continue against their respective foes.

Roughly 50,000 people have fled the two areas – 20,000 from Eastern Ghouta, a Damascus suburb, and 30,000 from Afrin, in Syria’s Kurdish-dominated northeast – according to some counts.

Eastern Ghouta has been at the centre of fighting between rebels and President Bashar al-Assad‘s Russian-backed forces in recent days.

The Syrian Observatory for Human Rights (SOHR) has said 46 civilians, including at least six children, were killed in air raids in the Kafr Batna district on Friday morning.

For his part, Bashar al-Jaafari, Syria’s ambassador to the UN, told the UN Security Council on Friday that more than 40,000 people were able to flee Eastern Ghouta the day before.

Jaafari’s estimate could not be independently verified.

Images posted online showed elderly women in wheelchairs and children carried by their parents as they walked amid the ruins of Eastern Ghouta.

The SOHR, a UK-based war monitor, said as many as 20,000 people have abandoned their homes, with many still waiting to be transported to safe zones.

Al Jazeera’s Alan Fisher, reporting from Gaziantep in neighbouring Turkey, said the exodus was expected after the Syrian forces cut off supplies.

The entire Eastern Ghouta is home to 400,000 people, and it has been under a government siege since mid-2013.

Following nearly four weeks of relentless bombardment, which has left more than 1,250 civilians including children dead, government forces are inching closer to capturing the rest of Eastern Ghouta, forcing civilians to flee.

Assad’s forces have already split the area, under siege since 2013, into three sections. The rebels, however, say they have retaken the town of Hamouriyah.

Against this backdrop of continued fighting, about 25 trucks of food aid were allowed on Thursday into Eastern Ghouta’s Douma district, according to the International Committee of the Red Cross (ICRC).

It is unclear how long the food supply would last in an area believed to be populated with as many as 125,000.

The aid does not include medical supplies.

According to UNHCR figures, there have been nearly 500,000 people killed and over 11 million displaced in Syria’s war, which entered its eighth year on Thursday.

Meanwhile, dozens of Syrian civilians, including children, have reportedly been killed as Turkish troops and their Free Syrian Army (FSA) allies continue to bombard Afrin.

Turkey says the area is controlled by Kurdish YPG fighters, who they consider to be “terrorists”.

The continued push by Turkish forces into Afrin has forced as many as 30,000 civilians to flee since Wednesday, the SOHR said on Friday.

On Friday alone, 2,500 people were displaced because of the fighting, according to the SOHR.

Al Jazeera could not independently confirm the SOHR’s claims.

Meanwhile, on the diplomatic level, foreign ministers of Russia, Iran and Turkey met in Kazakhstan’s capital, Astana, have held negotiations on the Syrian civil war.

The agenda at Friday’s meeting included how to maintain security in the established de-escalation zones as well as political and humanitarian issues.

The next round of talks is expected in the middle of May.

Al Jazeera’s Zeina Khodr, reporting from Astana, said there has been talk of the Russian government negotiating with Syrian rebels over the situation in Eastern Ghouta.

However, when it comes to the question of transition and the political future of Syria, the parties in the negotiation remain divided, she said. 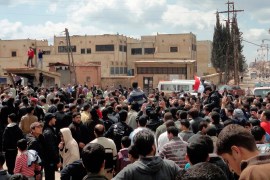 The Syrian civil war has entered its eighth year with more than 465,000 Syrians killed and millions displaced. 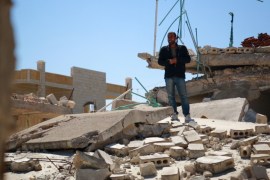 Syria: In the Ruins of a Dream

Five Syrians reflect on the devastation wrought on their homes, some of which took a lifetime to build.